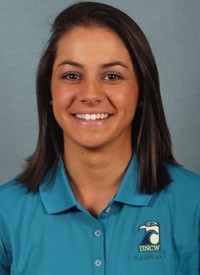 Kayla Thompson of Clarkton had two days of superior golf at the Hot Springs Championship in Hot Springs, Arkansas. She shot 74-68=142 to tie for fourth place and prize money of $1,838.

Due to rain, the tournament was cut from 54 holes to 38. During those two days Thompson was even on the par three’s, 3-under on the par fours and one-under on the par fives. The last day, with Thompson shooting 68, which was the lowest score posted that day, she climbed 15 places to finish tied for fourth.

She will be back in North Carolina to attempt to qualify for the U.S. Women’s Open. The qualifier will be held at Mid Pines in Pinehurst. Her plans are to return to Conway, Arkansas, to participate in the Central Arkansas Open on May 12-14.