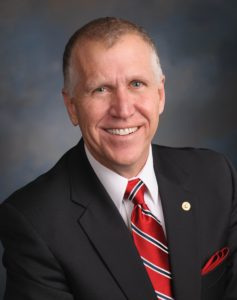 Senator Tillis toured the Texas-Mexico border earlier this year, spending days with Border Patrol agents and learning about the challenges and dangers they face on a daily basis.

Senator Tillis recently laid the groundwork for a methodical, step by step approach to bipartisan immigration reform that would start by securing the Southern border. The Wall Street Journal reported that, “What is different about the Tillis approach is that it tackles the issue incrementally—but at every step gives each party something that it wants….lawmakers and immigration experts said legislative efforts that pair the priorities of many factions stand the best chance of clearing Congress.”

He has been outspoken on the need to secure the border with major investments in personnel, technology, and infrastructure, which would include physical barriers where they would be feasible and effective in stopping illegal entries and the flow of drugs and counterfeit goods into the United States.

Senator Tillis on the most effective ways to secure the Southern border:

“I oppose putting a 30-foot structure on the top of a 3,000-foot sheer cliff, I oppose taking down two fences that are separated with an all-weather for border patrol agents in California that’s working. I oppose things that people on the ground think are not in the best interest and those are the folks that go out and put on the bullet proof vest every day and have to actually protect the border. They tell me that the wall in certain places makes sense but intelligence, reconnaissance and other structures makes sense elsewhere. So it’s just a common sense way of securing the border.”

Senator Tillis on the lack of security resources along the Southern border:

“We also have to understand that the border, the legal border crossing, right now and I was in Laredo, one of the bridges there, the border control agent said that they seize 30 kilograms of methamphetamine every 48 hours. It’s 300,000 doses of methamphetamine and they say they are only interdicting maybe 10-15% of all the drugs that are coming across. I’d rather spend the money we have now on helping them seize more of those drugs and secure the border and we’d have to fight the political fight but I think if we secure the border, the American people will be behind keeping that in place. “

Senator Tillis on the strategy to secure the border and reform the nation’s broken immigration system:

“We have to solve the problem. The biggest problem here Tucker is Republicans and Democrats have been talking about solving this problem for 40 years and they’ve all failed…One thing that we haven’t done is paired up things that would get support from the other side of the aisle with law enforcement measures…I am proposing actually being a Congress and a party that solves this problem versus being this generation of people who promise and never deliver.”