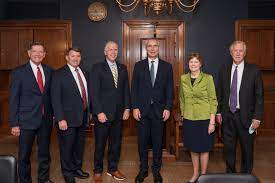 “Four years ago, we re-established the Senate NATO Observer Group to modernize the Senate’s coordination with NATO in response to evolving threats to western democracies. The work of this group to support the transatlantic alliance and defend democracy has unfortunately never been more important than amid Russia’s premeditated invasion of Ukraine. The transatlantic alliance is unified in supporting our Ukrainian partners, who’ve suffered unspeakable heartbreak as they bravely defend their land and freedom amid Vladimir Putin’s assault. The U.S. continues to work in lockstep with our allies to provide critical military and humanitarian assistance, and to impose the most devastating sanctions to date on Putin and his cronies. Over the weekend, the world witnessed unprecedented transatlantic coordination, from cutting key Russian banks out of the SWIFT international financial system, to blocking the Kremlin’s access to foreign currency reserves in the West, to sending weapons and aid to Ukraine. That follows last week’s historic activation of key elements of the NATO Response Force to bolster our allies and send an unmistakable message to Putin and his enablers that NATO stands ready to defend every inch of alliance soil from their aggression. As co chairs of the Senate NATO Observer Group, we stand ready to work with the administration and our global partners to support Ukraine’s sovereignty and to issue crippling sanctions ensuring Russia’s defeat. The NATO alliance has been the bedrock of our global order and security since the end of World War II, and Putin will face the full force of this alliance for his deadly crimes.”