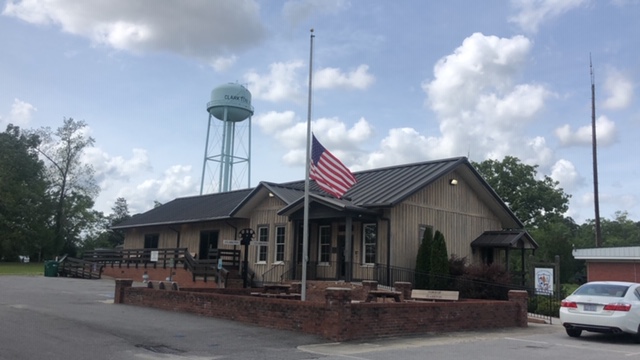 Clarkton’s monthly meeting on May 11th opened with a prayer by Town Attorney Clifton Hester and the Pledge of Allegiance. Following traditional monthly housekeeping duties, Mayor Tim Tart turned the floor over to Town Auditor Byron Scott with the regional CPA firm of Thompson, Price, Scott, Adams & Co. for the presentation of the town’s Fiscal Year July 1, 2018 to June 30, 2019 audit.

The Financial Statements were overdue a full five months, which will undoubtedly result in a “nastygram” from the NC Local Government Commission; on the other hand, the genuine good news in the details of the audit not only cheered the Town’s leaders, but will probably temper the LGC’s handslap.

These monies comprise an amount equal to 84% of the town’s annual General Fund budget, about an 11-month reserve; this will also make the LGC happy, as state statute requires a minimum balance of one month or 8% reserve in the General Fund. Most smaller, more rural towns in the state are between 16% and 33%, with some poorer communities well below that threshold and even into negative retentions.

The town’s total revenues across the General Fund and Water & Sewer Fund combined increased $116,100. Total expenditures and expenses on the other hand, decreased $221,800. Also decreasing was the town’s total debt, with bond and note payments bringing debt down by $41,665.

Mr. Scott ended his presentation by saying that Clarkton had received “an unqualified audit,” the highest audit rating meaning that there were “no qualifications to the numbers.” The audit will now be submitted to the LGC and will be available for viewing at Town Hall as soon as Covid19 restrictions have been lifted.

There was also a full plate of actions following the audit review:

The Commission reappointed Dale Guyton to the Bladen County Housing Authority, but determined that it needn’t donate to the Clarkton School of Discovery Junior Beta Club since school had been cancelled until next school year.

They reviewed and approved an amendment to the town’s Memorandum of Understanding with the NC Department of Public Safety for the period June, 2018 to May, 2019. This agreement allows the town to use state inmates, with payment due at the end of each fiscal year. The contract increased to $12,031 due to Governor Cooper’s salary increase for corrections officers last year.

The Board approved a $96,000 grant from the NC Office of Recovery & Resiliency for the purchase of a Bobcat excavator, and then immediately approved a Golden Leaf grant of $270,000 to match a $68,000 FEMA grant for the replacement of a headworks auger screen at the sewer plant. A contract with Withers & Ravenel Engineering was also approved for the engineering of the headworks project.

Public Works Director Chris Hall brought up the point that George Kelly Road, a half-mile long street making up part of the town limits was no longer fit to drive on, the street is virtually impassible, with cars continuously stuck in the eroded ditches.

He recommends that the Streets Department place permanent Road Closed signs at each end of the street. He realized that the road would need to be taken off the NC Powell Bill street assistance map and the town would lose some funding, but the cost of upkeep was greater than the state revenue lost.

Mr. Hall also stated that the enforcement procedures in the town’s Condemnation Ordinance needed to be updated so that he could proceed with getting rid of dilapidated housing within town. In addition, the town needed to coordinate with the Fire Chief about updating the burn ordinance

In a spate of additional last-minute housekeeping, the Commission quickly disposed of budget line item transfers, approved the town’s bills for March and April, and gave approval to advertise delinquent taxes.

They then scheduled a Budget Workshop for 6p.m. on Thursday, May 21st prior to adjournment.