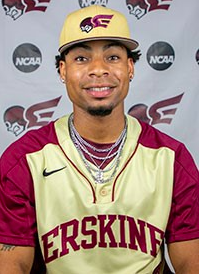 DUE WEST, SC – Former West Bladen star Trevor Lesane batted 3-for-9 with an RBI and 2 runs scored in Erskine’s weekend series with No. 4 Mount Olive. However the Trojans won 3 of 4 games against the Flying Fleet.

In the series opener Friday, Lesane belted a single to centerfield in the 4th inning but was stranded on base. The Tar Heel native knocked in teammate Cody Forster with a single to left in the 5th inning then scored on Tariq Bacon’s home run that capped the 6-run inning as Erskine posted a 9-0 victory.

In the nightcap of Friday’s double-header, the Trojans rolled to a 20-1 victory.

In Saturday’s opening game, Lesane ripped a single down the leftfield line then scored on Dalton Boyd’s home run that trimmed the Mount Olive lead to 6-4. The Trojans went on to win 6-4 then took the nightcap 22-6.

The  Flying Fleet are now 16-10 in Conference Carolinas play and 19-15 overall. Erskine will travel to Central, SC Wednesday for a 5 p.m. doubleheader against Southern Wesleyan.