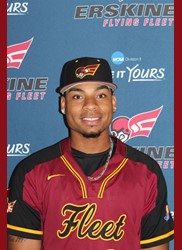 The Flying Feet were eliminated from the Conference Carolinas Tournament by top-seeded North Greenville Friday.

The Tar Heel native batted 3-5 with a double, a run batted in and 2 runs scored in a 12-6 Erskine victory over King University.

Lesane started 35 games and played in 44 games for the Flying Feet. The junior outfielder finished the season with a .242 batting average and totaled 29 hits, 22 runs scored, 19 runs batted in, 8 doubles, a triple and a home run.

Erskine completed the season with a 14-10 conference record and a 27-23 overall mark.