Tropical depression may form in Atlantic as hurricane season approaches

The Atlantic hurricane season begins June 1, according to the National Hurricane Center.

However, the weather tracking organization is watching an area of potential tropical development off the southeast coast of the United States. 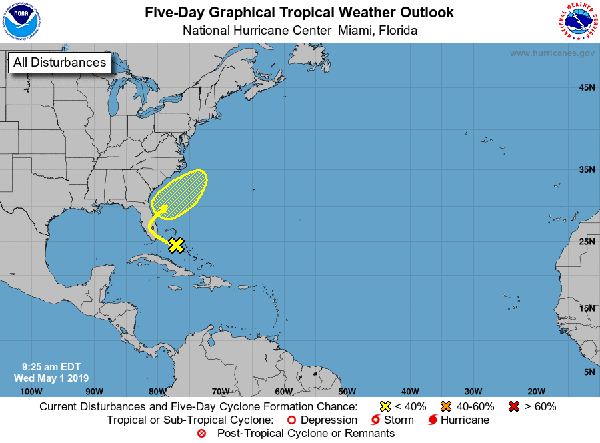 Will the Mother County be hit by a pre-hurricane season storm in 2019? Doubtful, according to the National Hurricane Center. In fact, as of Wednesday night, there only was a slight chance that Tropical Disturbance #1 will develop over the next couple of days, but the possibility of a storm formation increased to 20 percent within the next five days.

If it happens, the storm is expected to drench portions of the Florida peninsula before heading up the east coast. It’s expected to pass offshore in North Carolina, if, indeed, there is a storm formation.

Eight tropical systems have formed in the Atlantic Ocean in the past 10 years prior to June 1. Only Alex in January 2016 became a hurricane.

Here’s a list of early season tropical systems over the past decade: 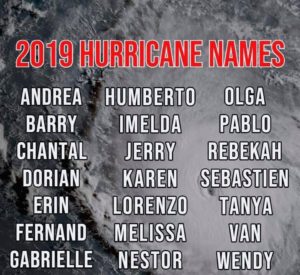 The National Hurricane Center has released the names it will use for hurricanes this season.

The National Hurricane Center and the National Weather Service will take part in Hurricane Preparedness Week beginning Sunday, May 5 through Saturday, May 11.

Researchers at N.C. State are predicting a normal hurricane season this year with 13 to 16 named storms. Five to seven of the storms may develop enough to become hurricanes with two or three becoming major hurricanes, according to the Raleigh-based researchers.