Today, if you need a can of turpentine, you drive to the store and buy it.

It wasn’t so easy in the 1700s and 1800s. Turpentine, along with tar, pitch and resin, were important commodities back then, much of it painstakingly produced in North Carolina. One story is that the industry led to North Carolina’s nickname as the Tar Heel state.

Bryan Avery believes it’s important for people of today to know what it was like for their ancestors during that time. That’s why he spends most weekends traveling around to festivals and events giving a history lesson on the importance of the products to North Carolina.

Saturday, his group stopped at Tory Hole Park as part of the activities for the Battle of Elizabethtown re-enactment.

“We do the products that they did in the 1700s and 1800s,” said, Avery, who is a historian from Lillington. “We make tar, pitch, turpentine, resin and charcoal. We give a production that goes from 1705 to 1950 on why we’re the Tar Heel state. Basically, tell people how the products were used in England on the ships. We also show them how the products were made in the early days.”

Avery’s demonstration comes complete with wood-burning fires and a large still. It’s a process that, back in the day, took a long time, Avery said. 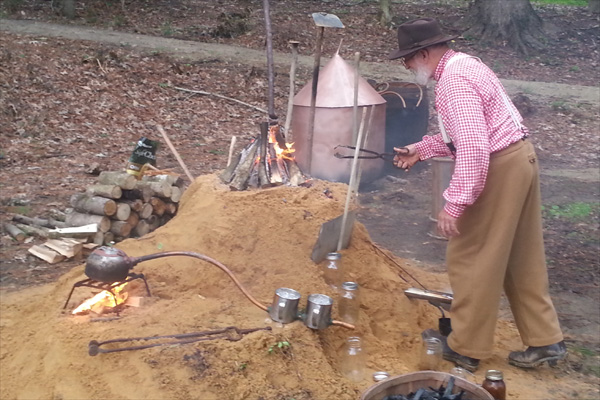 “You had to collect resin each month out of 280 trees to fill up one 32-gallon barrel with turpentine,” Avery said. “It was a farming process. The same way you get one bean off one vine. You got just a little bit off every tree and turn it into a product.”

Back then, turpentine was used for medicinal purposes as well as a paint thinner, Avery said. The tar and pitch would be used to caulk the sides of ships.

“We’re Tar Heels,” he said. “I think it’s important to know where your roots are, where you came from, and why this state became what it became.”

For more information about “River Town,” go to facebook.com/WelcomeToRiverTown