Two people who were wanted by other jurisdictions were charged Tuesday after reports that a motorcycle had been stolen from Tractor Supply in Elizabethtown, according to the Bladen County Sheriff’s Office.

Austin Tyler Chavis, 26, of Lexington, and Brittany Nicole Jones, 32, of Hope Mills, were captured following a high-speed chase that ended near Storms Road, authorities said. The pair also were charged with possession of drugs.

“We are very pleased that this incident ended without anyone being injured and we are thankful to our law enforcement partners, the Elizabethtown Police Department and the Bladenboro Police Department for assisting us in this matter,” Sheriff Jim McVicker said.

The incident began Tuesday afternoon with the report of the stolen Coleman motorcycle at Tractor Supply. A radio broadcast of the description of the people and the stolen tan Chevrolet S-10 truck was given out by the Bladen Central Communications, a news release said. The pickup had been reported stolen in Erwin.

Det. Sgt. Dustin Melvin was traveling on NC 87 Bypass at Peanut Road when he observed the vehicle at the intersection, according to the Sheriff’s Office. Melvin stopped the vehicle and as he approached the truck, the driver pulled off on Peanut Road toward Happy Valley. Melvin radioed for other cars and had them get in position to intercept the truck.

The vehicle traveled down Peanut Road to Twisted Hickory, turned left on Twisted Hickory to NC 242, and then right on NC 242 towards Bladenboro. The vehicle was traveling at about 85 mph and higher during the incident.

Deputies Reece Daniels and Matt Long set up Stop Sticks near Storms Road. The sticks punctured the tires of the suspects’ truck and a running roadblock was performed on the vehicle to apprehend the suspects by boxing them in with the officers cars. 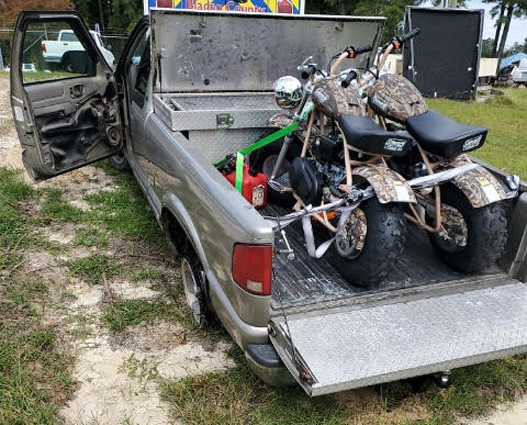 During a search of the vehicle, heroin, methamphetamine, cocaine, drug paraphernalia, and $1,170 were found.

Deputies also recovered another Coleman motorcycle which had been reported stolen from Tractor Supply in Selma.