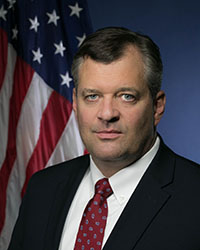 The emergency prohibition of fentanyl analogues expires on February 6.  Without action by Congress, law enforcement will not have the tools needed to protect Missouri families from the onslaught of these extraordinarily dangerous substances.

Illicit fentanyl and its analogues kill hundreds of Missourians annually.  Fentanyl is 80 times more powerful than heroin and only a few grains can cause a fatal overdose. Additionally, distributors are now mixing fentanyl with other drugs which increases the risk for unsuspecting buyers and for overdose deaths.

Examples of the problem can be found in this courthouse constantly.  Within the last two weeks, law enforcement officers seized a shipment of 10 kilograms of fentanyl on Interstate 44 in Saint Louis County, Missouri.  That is roughly 22 pounds of poison capable of killing tens of thousands of Missourians.  The courier from Arizona was 18 years old and now could face decades in prison.  Just yesterday, Shannon Rennee Bradley, 25, of Washington, Missouri, pled guilty for her role in the distribution of heroin and fentanyl that killed a 24-year old Washington, Missouri woman.

If Congress fails to act, this office and our law enforcement partners will lose an effective tool that we need to protect Missouri families from the onslaught of these extraordinarily dangerous substances.  Congress must take action immediately to extend the scheduling of these dangerous substances because this fight is far from over.

Tags: U.S. Attorney Jeff Jensen's Statement on the Importance of the Emergency Prohibition of Fentanyl Analogues