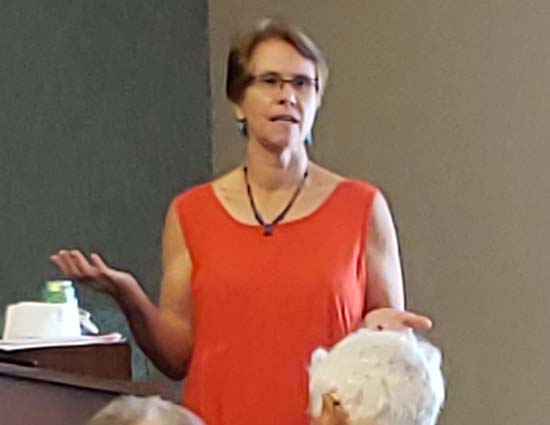 The first in a series of educational workshops titled “Understanding White Lake” was held Tuesday afternoon at White Lake Town Hall. Citizens and property owners filled the room to hear Dr. Diane Lauritsen (pictured, above), PhD with LIMENOSCIENC, give an overview of White Lake and the data that has been compiled over the last year. She explained that the workshop was the first in a series of educational events to support education and outreach concerning the lake.

Lauritsen gave a general overview of the hydrology of the lake. As many people know, the lake is owned by N.C. State Parks. The State has not developed a lake management plan, only a plan for recreational use. Therefore, her focus has been to help facilitate a management plan for the 1,000 acre acidic lake that has five miles of shoreline.

Lauritsen explained that through monitoring and gathering of data, several changes have been noted about the lake – the main source of water for the lake is rainwater; rainfall pH levels have increased over the last few years; and photosynthesis has caused substantial increases in pH levels of the lake. 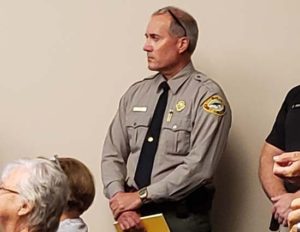 Nutrient levels also are being monitored.

The town is undertaking a $2 million sewer project to replace pipes that may have leaks and have groundwater seeping into the pipes. Other areas that may eventually need to be addressed are the effects of lawn fertilizers and boat use that may be stirring up sediment.

N.C. State Parks only monitors the lake water once every five years. The town is monitoring the lake on a monthly basis along with Hydrilla surveys being conducted by N.C. State University. Assessments have also been completed by the Bald Head Island Conservancy and the University of North Carolina Wilmington. 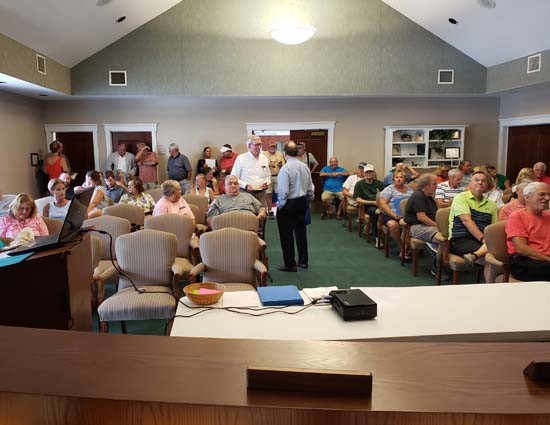 The main concern among those in attendance centered around the low level of the lake.

“The first depth survey of White Lake was conducted in 1947 and a bathymetric map of depth contours was subsequently created,” Lauritsen said. “The deepest point in the lake was 10.6 feet, and the average depth was 7.5 feet. The lake surface area was 1,068 acres, with 4.8 miles of shoreline.

The following information appears on the N.C. Parks/Singletary Lake website: (For White Lake Users) – Please note that lake levels on nearly all North Carolina bay lakes are low at this time due to the recent drought. White Lake, as of June 14, 2019, is slightly above its culvert level of 63’6″ (above sea level), presently at 63’7.” White Lake, like other bay lakes, is nearly entirely dependent upon rainfall. The lake’s culvert was built in 1993. Nothing has been done to lower water levels, the present level is simply the result of lack of rain. Boaters should exercise caution with fixed-propeller vessels while operating inside of established no wake buoys and poles. Lake levels are expected to continue to rise as precipitation continues.”

Questions still remained regarding the removal of sandbags at the Turtle Cove outflow. Mayor Goldston Womble said that the sandbags were removed by  a Department of Water Resources employee (Sandbag Bandit) without the knowledge of the town or State Parks. Ed Wilkerson with Singletary Lake has talked with his supervisors and they have agreed that once the level of the lake starts rising, the bags will be replaced to help raise the water level.

Womble reiterated to those in attendance that the town has a long-term goal to preserve and protect the lake. The town is moving forward with formulating a group of stakeholders and agencies to begin the process of a lake management plan. The town is looking for funding for the process and the ongoing monitoring of the lake.