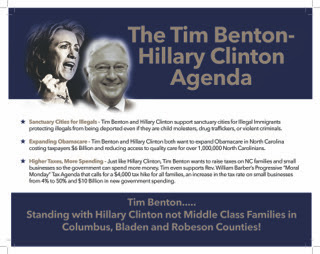 RALEIGH, NC – Yesterday Brenden Jones was victim to an assault by his Democratic opponent Tim Benton while they were at a local family festival. Both are State House candidates for District 46 in North Carolina. A mail piece went out recently stating the similarities between Tim Benton and Hillary Clinton, which caused Benton so much strife that he verbally and physically assaulted Jones in public.

“There is absolutely no place for physical violence in our electoral system today,” stated Chairman Robin Hayes. “Tim Benton’s actions are completely unacceptable, and we call on the North Carolina Democratic Party to join us in denouncing this barbaric behavior. Mr. Benton should withdraw his name from the race immediately. We must lead by example, and Mr. Benton has no business representing any part of North Carolina after showing his true colors yesterday.“

Democrat Tim Benton has been issued a criminal summons and will appear in court on assault charges. Republican Brenden Jones was not charged and witnesses told local media the assault upon him was unprovoked. 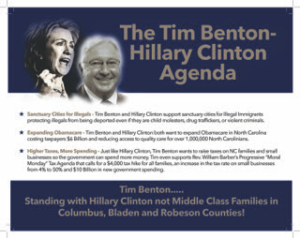 “Mr. Benton was completely overwhelmed with misplaced anger because he was being compared to Hillary Clinton, the presidential candidate for his very own party. His inexperience in the political workings of a campaign caused him to assault Brenden and draw even more attention to his own problems. We have ran a clean and respectful campaign concerning the issues that matter most, and Mr. Benton’s actions yesterday are completely unacceptable and uncalled for.” – Mr. and Mrs. Brenden Jones

DETAILS OF THE ASSAULT

Yesterday afternoon Tim Benton spotted Brenden Jones at the local Beast Fest in Bladenboro, NC. He approached Jones very aggressively in front of families, while pushing his own grandson in a stroller. Jones tried to calm him down and asked if they could go across the street to get away from the growing crowd. Benton was spewing profanity, screaming in Jones’ face saying, “I’m going to kick your ass by the end of the day,” and repeatedly nudging his shoulder. The two men went to the other side of the road, meanwhile Benton left his grandson in his stroller on the edge of the street causing Mrs. Jones to divert her attention away from her husband to care for the child. Then Benton proceeded to sucker punch his opponent, Brenden Jones, while Jones kept his hand in his pockets the whole time. Witnesses flocked to Mr. and Mrs. Jones offering support. Countless bystanders apologized to Jones for the behavior of Benton and explained that his actions do not represent their town and its people. 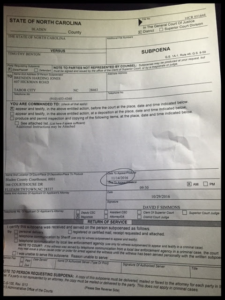