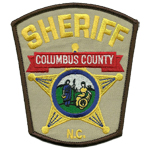 Whiteville, NC – On February 15th, just before 1:00 p.m., Columbus County Sheriff’s Office responded to a wooded area off of Hallsboro Road North in Whiteville.  A logging crew working in the area located skeletal remains approximately a mile from the highway.  Columbus County Sheriff’s Office Criminal Investigation Unit responded to the area and secured the scene.  Detectives searched the scene, locating skeletal remains along with personal items, including clothing.  The remains were transported to the North Carolina Medical Examiner’s Office in Raleigh.

The North Carolina Medical Examiner’s Office has confirmed the identity of the skeletal remains, as Arthur Lee Heyward.  Mr. Heyward died of natural causes.  The evidence in the investigation suggests that Mr. Heyward left his residence and walked to a heavily wooded area off of Hallsboro Road North.  Mr. Heyward suffered from medical issues that caused disorientation.  He was unable to navigate his way back to safety due to the heavy forestation and due to his medical issues.

“My office and I would like to offer our heartfelt condolences to Mr. Heyward’s family and friends.  We continue to pray for comfort during your time of grief.” Sheriff Lewis Hatcher stated in his press release.