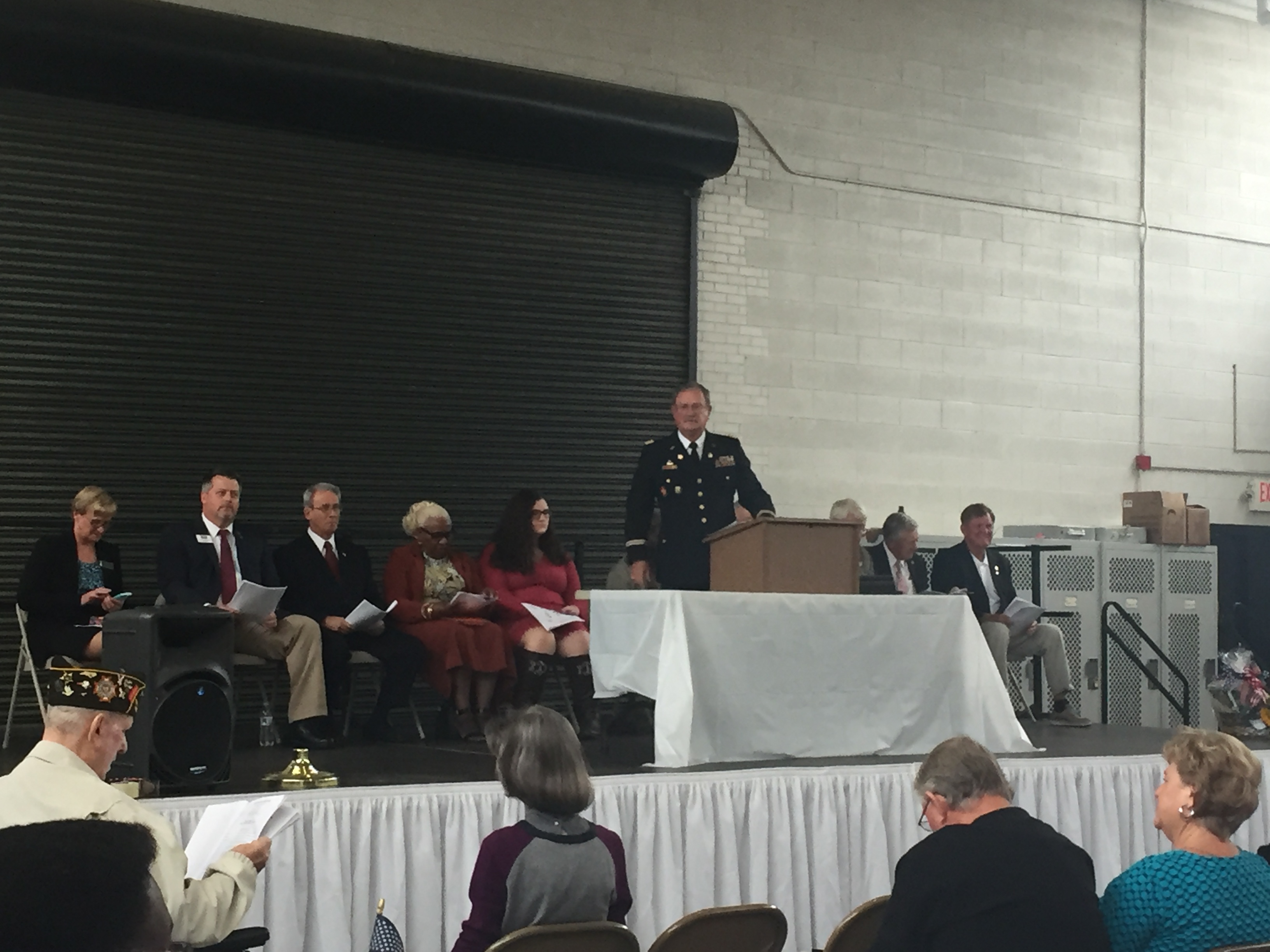 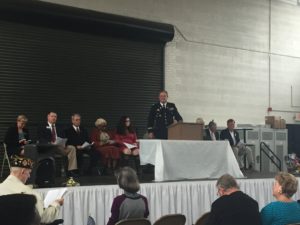 To view more pictures from the ceremony, click here.

Two Bladen County veterans were honored with the Order of the Long Leaf Pine during the 11th annual Veterans Day Celebration held Wednesday morning at the National Guard Armory in Elizabethtown. Lt. Col. Roy Allen, US Army retired, welcomed everyone to the event.

“It is truly an honor to be with you today and to thank our veterans in the armed forces for making America great and making America free. Thank you for all of the services you have provided,” said Brisson.

He continued, “It is an honor to be able to present two of our recipients today with the most prestigious award award can bestow on a citizen.”

Brisson read from the Order of the Long Leaf Pine before making the first presentation to Robert  Curtis Hester.

Hester was moved by the presentation as Brisson read from the certificate. Hester accepted the honor and turned to those in attendance and said, “I love you all.”

Following Hester’s presentation Brisson continued by announcing there was a second recipient of the Order of the Long Leaf Pine to be presented today. He called on Tiina Mundy to come forward.

A visibly surprised and moved Mundy said, “I’m overwhelmed. What an honor.”

A Memorial Tribute was also made in memory of Charles McMillian, Sgt. First Class, US Army retired. His family was presented with a certificate during the event.

The West Bladen High School also provided music for the program including playing the theme song for each branch of the military. The band also treated the veterans and their families to a rousing rendition of “Respect.”

The keynote speaker for the event was LTC Chris Froeschner, US Air Force retired, who serves as Vice-President of Operations of USO of NC.

He began by recognizing the veterans and their family members who were present.

“We know as a veteran and my family knows families have lived through difficult times and taken on a heavy load,” said Froeschner.

He pointed out that the military service members we honor today come from all walks of life.

“Nothing can replace the hole left by fallen service members,” said Froeschner.

He said there is a very special group of veterans that also deserve recognition. They are those who remain listed as Missing in Action. Forester said it is our obligation to account for them.

Froeschner also recognized those in attendance who are Vietnam veterans. He noted they returned home to find a country divided politically.

“In peace time our veterans sought to build a better world,” said Froeschner.

He said because of our veterans, the United States is a  symbol of a higher ideal. He added that we depend on our veterans as we move int the future.

Currently, there are 22 million living veterans, said Froeschner. In a nation of 319 million people only 2.1 million are serving in the armed forces.  He explained that means that 1 percent of the population is standing guard over our liberty.

Froeschner said that North Carolina is home to 12 percent of all active duty forces. He briefly explained that the USO of NC provides various support service for military members and their families. Some fo those services include suicide awareness and prevention; helping service members transition to the civilian world; teaching them financial responsibility; providing various support service and keeping service members connected to their families during deployments.

Froeschner said the USO evolved from solely providing entertainment to soldiers to meeting the growing and changing needs of military members and their families by listening to the military leaders.

He said the USO of NC relies on the generosity of donors. There are only 26 full-time staff and the rest are volunteers.

NC Serves is collaborative network of service providers of which USO of NC is a quarterback agency, said Froeschner.  NC Serves assists veterans in finding help they need.

“Your presence here today is a tribute to those who serve. The living, those who have passed on, the missing in action. We remember and honor them all,” said Froeschner.

Also, Rufus Lloyd of the Elizabethtown Town Council and Bladen County Commissioners Chairman Russell Priest, both welcomed those in attendance. Rev. Mitchell gave the invocation and Dr. William Findt, President of Bladen Community College invited everyone to attend the Veterans Day Ceremony planned for 11 a.m. Friday in the school’s auditorium.