It was a week that avoided tragedy, entertained on stage, and included a college signing. 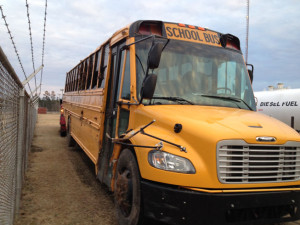 Eighteen students from Clarkton School of Discovery and Booker T. Washington Primary School were taken to the hospital mostly as a precautionary measure Friday, Feb. 6 after the bus they were riding flipped on its side on Mercer Mill Brown Marsh Road near Harrelson Road. The accident happened about 3:30 p.m. as 39 students were being transported home from school.

It appeared the bus slipped off the road while going around a curve. The driver, whose name was not available, lost control of the bus trying to get back on the road. The bus then flipped onto its left side.

After that news, we needed something to take our minds off what could have been, but, fortunately, wasn’t with the bus accident.

It came Saturday, Feb. 7, with “He Cheated! Why Me?”, a LoWanda Davis Productions stage play at Elizabethtown Middle School. The romantic comedy was hosted by Palmer Williams Jr., who portrays Floyd on Tyler Perry’s “Love Thy Neighbor” on the Oprah Winfrey Network, and included Euclid Gray among the cast members. Gray was in Tyler Perry’s “Meet the Browns.”

“We need more events like this here in Elizabethtown and Bladen County,” Elizabethtown Mayor Sylvia Campbell said. “I want to give LoWanda a huge shout out for having this here because it takes a lot of blood sweat and tears to pull this off. We really appreciate it.” Davis is an Elizabethtown native.

“When we visited, the team and the coaches really made us feel welcome,” Farrell said. “The atmosphere was a lot like it is here, and they are crazy about football.”

In other news last week,

** Bladen County schools received five C’s, seven D’s and a F for the 2013-14 school year in the state’s newly mandated School Performance Grades report card. Bladen County Schools Supt. Dr. Robert Taylor acknowledged there is room for improvement, but says the report is only one benchmark in measuring success and that Bladen County schools are providing a quality education.

** Remember when it looked like gas prices in Bladen County were headed below $2 per gallon. Forget it, according to information from gas-pricing Web site gasbuddy.com and AAA Carolinas. We got close — as low as $2.02 reported at Food Plus in Bladenboro, but by the end of the week, prices were between $2.10 and $2.17 in the county. That’s still more than $1 lower than a year ago.

** Bladen County Commissioners approved 2 part-time positions to assist Animal Control in an effort to improve customer service. The department was short-staffed after the closing of the Department of Corrections facility at White Lake.

** In sports, the West Bladen boys’ basketball team took sole possession of first place in the Four County Conference following their 73-61 win Friday, Feb. 6 at Clinton. The Knights are 9-3 in the league with two games remaining in the regular season. Meanwhile, the East Bladen girls basketball team roared through another week and improved their record to 22-0.

** Businesses featured in the past week included All Out Stitches, City Cleaners, and Yia Yia’s Gift and More.

That’s the week that was in Bladen County.