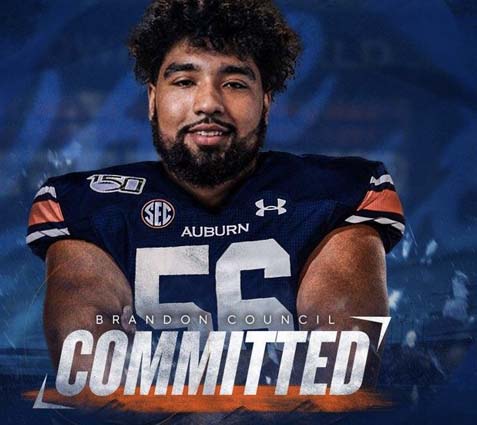 Former West Bladen star Brandon Council will start at right guard Saturday for No. 8 Auburn as the Tigers host No. 23 Kentucky in their season opener on the SEC Network at noon (EST).

All of the Southeastern Conference football teams released their two-deep depth charts Tuesday for their season openers on Saturday.

A 3-sport star in football, basketball and track and field at West Bladen before graduating in 2015, Council played offensive line at Jireh Preparatory Academy in Matthews in the fall of 2015 where he raised his SAT score and was recognized as the No. 17 recruit among prep school players by Rivals.com.

“Brandon Council is the best offensive lineman to ever play here,” tweeted Jireh Head Coach Ryan Williams in February. “Huge, powerful and MEAN! He will takeoff!”

In 2016 Council redshirted at Akron University before starting the final 8 games of the season at left guard in 2017 as the Zips received a berth in the Boca Raton Bowl. The Tar Heel native ranked 7th in the country for Fewest Pressures Allowed among guards allowing the Akron quarterback to be pressured only 3 times on a total of 263 pass block snaps.

Council started the first 3 games of 2018 for Akron before suffering a season-ending injury. The Zips won 2 of those 3 games including an upset of Big Ten foe Northwestern. In 2019 the versatile Council started 8 games at guard, 3 games at tackle and once at center.

Since he only played in 3 games in 2017, Council received a medical redshirt that will give him 2 years of eligibility at Auburn.

Council, the son of Angel Jones and Robert Council, is scheduled to graduate from Akron in May with a degree in sports management. He is pursuing a graduate degree at Auburn in higher education that will put him on a path to become an athletic director after football.

One of the highlights of Council’s career at Akron was the opportunity to play against Big Ten schools such as Northwestern and Illinois. Now he will get a chance to play at Alabama in the Iron Bowl on November 28th, and the Tigers will host defending national champion LSU on October 31st.