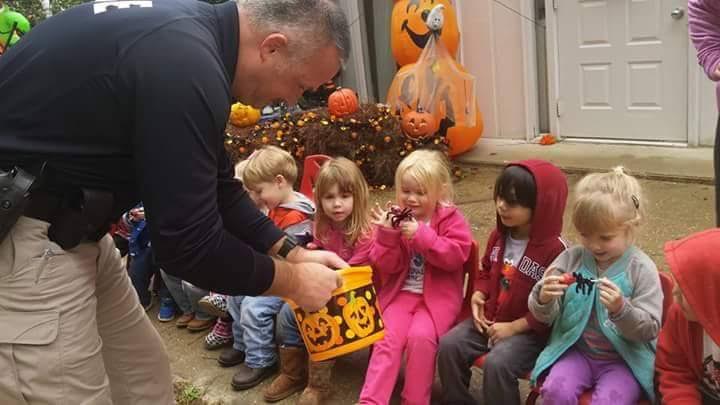 Children enrolled at Sunshine Corner Daycare have been participating in a “Community Helpers” series in October.

Tuesday, the 16 2- and 3-year-olds at the Elizabethtown facility were visited by White Lake Police Officer Jay Davis, who spoke about law enforcement’s role in the community.

After pulling up to the daycare with patrol car lights flashing, Davis showed and explained about his uniform and equipment followed by a question-and-answer session with the children.

Davis then demonstrated fingerprinting, and sent a fingerprint card home with each child bearing two of their fingerprints, along with a treat. Next, each child sat in the passenger seat of the patrol car and was able to turn on the lights and sirens.

“The children really enjoyed (Davis) being here and had a lot of fun,” Sunshine Corner Daycare owner Sharon Guyton said. Parents told daycare staff the next morning that the children told them about the visit.

The White Lake officer’s visit was part of a monthlong initiative by Guyton and instructors Aspen Batten, Crystal McDaniel and Shala Cox about various community helpers and their involvement in Bladen County. The children also were visited by members from the Elizabethtown Fire Department and Bladen County Emergency Management Services during the month.