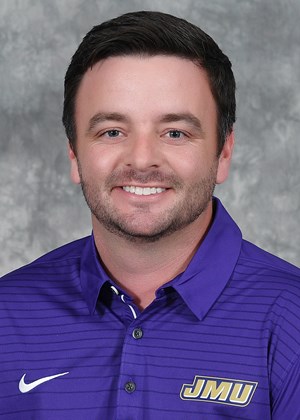 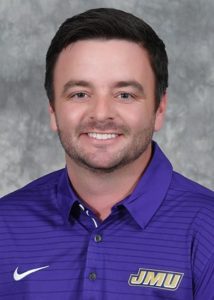 In a press release from James Madison, Bourne said, “Tommy is a great fit for the culture we promote within JMU athletics. He was an honor roll collegiate athlete and has maintained that balance of competitive success and growing the person as he has moved into coaching.”

Bourne continued, “In each step of his journey, he has accepted new challenges and left a program better than he found it. We are eager to witness him make a similar impact on our student-athletes at James Madison.”

Coach Baker, the son of Dr. Warren Baker, honed his golfing skills at White Lake Golf course (now Vineyard Golf at White Lake) playing with his father who was a low handicap golfer.

After graduating high school Baker attended the University of North Carolina at Pembroke where he played four years on the golf team. He earned his bachelor’s degree in exercise and sport science at UNC Pembroke in 2006, adding his masters in physical education with a concentration in sports administration in 2008.

Tommy spent two years as assistant golf coach at UNC-P after his graduation before becoming head men’s golf coach in 2008 at Coker College in Hartsville, SC.

After five years at Coker, Baker accepted the head women’s golf coaching job at St. Leo’s University in Florida in 2013. In four seasons at St. Leo’s he coached three WGCA All-Americans and his teams qualified for the NCAA South Super Regional in all four seasons.

In 2015-16, St. Leo’s earned their first-ever bid to the national championship where they tied for fourth place. Baker also coached St. Leo’s Marie Coors to the individual title at the 2017 NCAA Division II Women’s Golf Championship. Coors had been the top-ranked player in Division II for most of 2016-2017.

Baker then became the assistant women’s golf coach at Colorado State University for the 2017-2018 campaign. CSU finished third in the Mountain West Championship – their highest finish since 2010 – and junior Katrina Prendergast set the program record for single-season scoring average.

Baker who becomes JMU’s sixth head coach in program history said in the press release, “”I am extremely honored and excited to be joining the JMU family. I am excited for the future of this program because of the amazing players currently on the roster and because JMU has everything a student-athlete could possibly want to be successful in their sport and their life.”

Baker added, “I also want to thank Jeff Bourn, Geoff Polglase and the JMU Administration for this incredible opportunity, and most importantly my wife, Jessica, for her amazing support in this decision.”