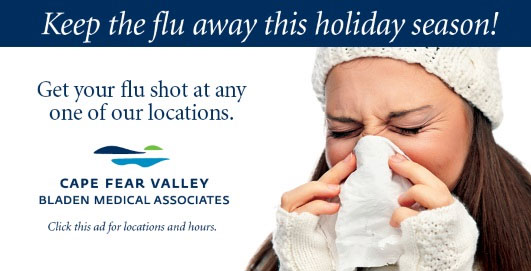 The frigid temperatures in Bladen County earlier this month served as a warning that winter is coming. The coldest season of the year officially begins at 6:03 p.m. on Dec. 21.

Bradley Kinlaw, who is the director of Bladen County Emergency Services, says now is the time to prepare. After three winter storms within about a six-week period in January and February, Kinlaw hopes folks are more likely to heed the suggestion.

Gov. Pat McCrory has declared Nov. 30 through Dec. 6 as Winter Weather Preparedness Week in North Carolina. He urged all residents to update their emergency plans and stock their emergency supplies kits.

“A lot of lessons were learned last year with the winter storms,” Kinlaw said. “The biggest thing for the public is being prepared to be without power in the cold weather. Having an alternate heat source.

“I had to learn a lesson myself because I was at the Courthouse for the entire (storm), and my wife and children were home without power,” he said.

Whether it’s wood for the fireplace, a gas log in an unused fireplace, a kerosene heater, or a generator for an alternate heat source, Kinlaw also said it’s important to have a carbon monoxide detector, a smoke alarm, and a fire extinguisher in your home.

“I can’t stress enough (those items) 365 days a year, not just for a winter storm,” Kinlaw said.

The last of the three winter storms to hit Bladen County earlier this year was the worst. The National Weather Service estimated that up to an inch of ice and six inches of snow fell in parts of Bladen County in mid-February. It brought life to a virtual standstill and left more than a thousand households and businesses without power.

In early January, for the first time since 1994, according to the National Weather Service office in Wilmington, Bladen County failed to break the freezing mark during a 24-hour period as the polar vortex — a weather system that’s created when a number of factors come together in precisely the correct way to bring frigid arctic air into the south — roared into the area. The temperature stayed below 32 degrees for about 36 hours.

Nick Petro, warning coordination meteorologist with the National Weather Service in Raleigh, said this year’s winter outlook features a slightly higher chance of above average amount of precipitation. He adds that the chances of above-, near- or below-average temperatures remain even. “The events that make winter memorable, such as big snow or ice storms, depend on conditions in the atmosphere which are just not predictable beyond a week or two. That is why residents need to be prepared in advance for any type and amount of winter weather,” Petro said.

Along with an alternate heat source, Kinlaw recommends a supply of batteries, a battery-operated radio, and enough canned food and bottled water for at least three days. Many emergency officials suggest a land-line telephone that’s plugged into the wall because cordless phones will not work without power and cell phones were not be able to be recharged.

“Whether it is sleet, snow, ice or freezing rain, be sure your family is ready,” Gov. McCrory said. “Use the ReadyNC mobile app to find out what supplies your family needs, what the traffic conditions are and where to go if you need shelter. Planning ahead will help keep your family safe during winter storms.”