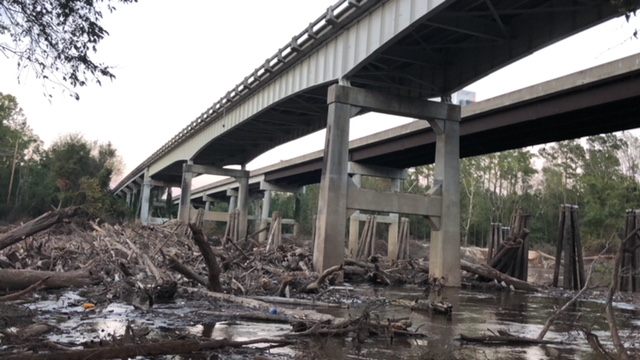 Work to complete removal of log jam slowed by flooding

Work to remove a log jam from the Cape Fear River that has been pressing against the US 701 bridge near Elizabethtown, has been moving slowly recently  thanks to periods of high water and flooding.

Andrew Barksdale, with N.C. Department of Transportation’s Communications Office, said the work to remove the log jam is estimated to be completed in about two months.

“We aren’t making any progress this week due to the flooding. However, we have made a lot of progress since they began in November,” said Barskdale.

He said the contractor has removed all of the floating debris is now working to remove the debris that is below the surface of the water, and in some cases, on the bottom of the river.

“We are paying them to remove all of the debris under and around this bridge. Some of this debris (we are talking about trees) has been there for a long time, not just from Florence, but we want to remove it all,” said Barksdale.

When asked about inspections on the bridge, Barksdale said visual inspections of the structure have been made and the bridge appears to be in good condition. He cautioned that inspectors have not been able to put boats into the water nor have divers been able to enter the water for a closer inspection. Once the log jam is fully removed, inspectors can then get a closer look at the complete bridge structure.

“We can fully inspect the bridge, and if everything is good, we can reopen soon thereafter,” said Barksdale.

Another potential slow down, however, has been worked out. There is currently a moratorium on work in the Cape Fear River in place, but the US Army Corps of Engineers is allowing NC DOT to continue the work to remove the log jam.

Barksdale said, “In late January, the U.S. Army Corps of Engineers agreed to allow our contractor to continue working in the river to remove the log jam. This is emergency work caused by the hurricane.”

Barksdale stressed inspectors for NC DOT can not fully and safely inspect the bridge until the log jam has been removed. That is the reason the Corps of Engineers is allowing the work to continue during the normal construction moratorium period, which started February 1.

“The Corps also recognizes that we are trying to remove material that is going downstream to where they are doing work on a lock and dam. Again, this is emergency work. The other contracted work – repairing the fender system damaged by Matthew – is not an emergency and will not be done until after the construction moratorium in the river ends later this year,” said Barksdale.

To date the work has cost NC DOT $392,281. That is the amount of the first invoice received by NC DOT, according to Barksdale, and it covers work performed from November 2018 through February 2019. The total contract for the work to be performed was set at $1.6 million.