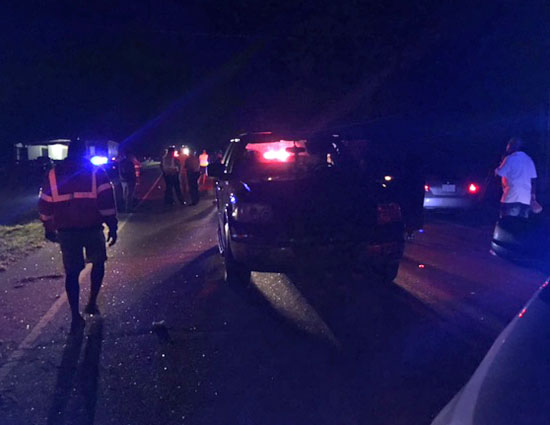 The night ended on a serious note in Clarkton on Saturday. A teenager was hit by a vehicle after being chased by a man welding a chainsaw coming from a local haunted house, according to a state trooper on the scene.

The accident occurred on N.C. 211 close to the railroad crossing at Abbottsburg and east of Twisted Hickory. Emergency responders called in for a helicopter for assistance due to the injuries sustained by the teenager. The teen’s identity has not been released.

According to officials, the victim was chased from the Clarkton Haunted House by a person charging at him with a chainsaw. The injuries are reported to have been critical.

The following is a statement issued by Frankie Burney, spokesperson for the Clarkton Haunted House.

“This was a freak accident that happened at the haunted house tonight.  Kid with the saw chased a group out of the back of the house like always. The kid that ran hadn’t gone through the house. I guess the actor thought he had and chased him to the peanut shelter. When the kid kept running the actor cut the saw off and started hollering for him to stop. The kid kept running so the actor took his mask off and jogged behind him still hollering for him to stop. The kid ended up running through the field and up through the ditch a 1/4 mile down the road towards Bladenboro. He ran onto the road, the actor was still yelling for him to stop. He ran back off the road onto the shoulder then stopped and ran right back in the road in front of the car.  Luckily about half the house workers are on the fire department so first responders were there very quickly.“