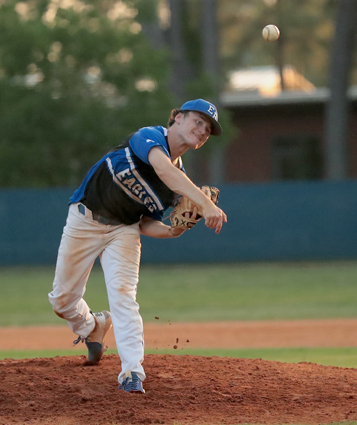 Meares finished the season with a 7-0 pitching record and allowed only 1 earned run in 44 innings pitched (0.16 earned run average) while striking out 79 batters.

But it was on the mound where Meares dominated the opposition, beginning with 6 innings of no-hit relief that included 11 strikeouts as the Eagles rallied from a 4-0 deficit to win their season-opener 5-4 over Whiteville.

When the Eagles traveled to Whiteville for their conference opener, Meares flirted with a perfect game into the 6th inning before settling for a 1-hit shutout that included 14 strikeouts in a 5-0 win.

Meares fired a no-hitter and struck out 13 in a 5-inning 14-0 victory over West Columbus. In the game that clinched a share of the TRC title for the Eagles, the hard-throwing righthander struck out 11 and pitched a 3-hitter in a 3-1 victory at East Columbus – the run was unearned.

In the playoffs Meares earned the victory in a 6-1 victory over Croatan then closed out his pitching season by firing a 2-hitter and striking out 9 in a 5-0 win at North Lenoir that earned the Eagles a berth in the Eastern Finals. Meares was unable to pitch against Randleman due to pitch-count limitations.