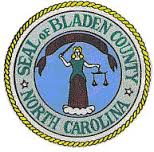 The Bladen County Commissioners met in the Superior Courtroom of the County Courthouse as Chairman Ray Britt gaveled the meeting to order a 6:30pm. With the designated minister unable to attend, the Chairman gave the invocation. County Manager Greg Martin led the Pledge to the Flag. And the nine-item Consent Agenda was approved.

With many family members present, Robert A. “Robby” Priest was sworn in as a Commissioner by Clerk of Superior Court Niki Dennis to fill the vacancy on the Board left by the untimely passing of his father, Russell Priest. Chairman Britt then presented the Priest family with a resolution of the County Commission honoring the memory and service of Commissioner Priest.

During the public portion of the meeting, Ms. Carlene McIntyre again appeared before the Commission to speak in opposition of the rezoning of 118 Davis Road in the Garland community. A public hearing on this matter had been held during the September 8th Board meeting, where it was learned that the Planning Board had met on the matter and had unanimously approved the zoning change.

In rebuttal to Ms. McIntyre, Mr. Jermaine Johnson, the petitioner requesting the rezoning, came to the podium; he reiterated his September 8th statements to the Commission that his business met all state requirements, and that he planned on being a good neighbor.

Mr. Russell Worley, Maintenance Director for Bladen County Schools appeared before the Board to request approval of a grant application for $31,856 from the NC Lottery Public School Building Capital Fund; this money will be used to install two 15-ton HVAC units at Elizabethtown Middle School. The Commission unanimously approved this application.

The Board then considered the rezoning of 118 Davis Road in Garland. Having heard the arguments for and against the request, and giving consideration to the recommendation of the Planning Board, the Commission approved this rezoning, with Commissioner David Gooden voting nay..

Finance Director Lisa Coleman was next at the stand to present financial dashboards for the two months ending August 31st. These are the first two months of the new Fiscal Year, with revenues and expenditures theoretically both at 17% of budget; actual revenues are at 25.6%, while expenditures are at 15.3%, providing a year-to-date Fund Balance cushion of $4,742,432.

Ms. Rene Davis, Tax Administrator, requested Board approval of a bid of $5,500 on county-owned property in Clarkton; this bid was unanimously accepted. She then requested approval for “reserve pricing” for specific county-owned properties when “current investment to the County” is greater than the assessed ta value of that property. This also met with unanimous approved.

Ms. Davis then requested consideration of a pilot program using the sealed bid procedure for tax delinquent properties that have been in the County’s name for over three years. During discussions, Commissioner Charles Ray Peterson opined that this may work for all such properties; the Commission then unanimously approved placing all such properties under the program, not only those in the over-three-year category.

Finally, Ms. Davis referred back to her request from September 8th, again asking consideration for transitioning a part-time tax collector to a full-time Collection Support & Audit Specialist; this expanded position, with a cost of $45,000 including benefits, would more than pay for itself during tax collection and audit periods. The Board also unanimously approved this request.

Health & Human Services Director Dr. Terri Duncan appeared before the Board, first, to inform them of the most current Covid19 statistics: She reported that there are currently 71 active Covid19 cases in the County and there have been twelve deaths since the onset of the pandemic. Testing throughout the county is averaging 451 daily.

The Commission determined that the next six items for which Dr. Duncan was seeking approval were substantially similar and, though discussed individually, would be dispensed with on a single vote. These consisted of:

There were no questions from the Board, and the six items were approved unanimously.

Emergency Services Director Nathan Dowless came before the Board to request approval of a resolution assigning him authority under the County’s Hazard Mitigation Grant Program’s Property Acquisition Projects. This resolution delegates to the Emergency Management Director, authority to establish just compensation when buying buildings following disaster events and to also sign sales agreements on those properties; the resolution contains specifications and guidelines for establishing compensation. The Commission approved the resolution unanimously.

Parks & Recreation Director Grant Pait was present to request approval of Fall, 2020 softball and baseball programs. He stated that both football and soccer were sports whose potential personal contact may exacerbate the spread of Covid19. When queried about a program timeline, Mr. Pait said he anticipated beginning signups immediately with the games starting by the second week in October. Again, the Board unanimously approved the proposal.

The Board then took action on six appointments to Keep Bladen Beautiful: KBB members Erin Smith, Marlene Diehm and Sondra Guyton were reappointed to three year terms; William Craig was appointed to fill the remaining year of Allison Rockenbach, who had resigned; and, Nick Norris from East Bladen High School and Cara Beth Lewis of West Bladen HS were appointed as additional student representatives.

By unanimous vote without discussion, the Board then reappointed Ralph Carter to the Voluntary Agricultural Districts Committee.

Finishing up the evening, County Manager Greg Martin reviewed the upcoming calendar for the Commission. He then asked the Board’s thoughts of sending the County’s legislative goals to the NC Association of County Commissioners, where Bladen County’s preferences will be allotted to select committees for further consideration. The Commission approved forwarding its goals to the NCACC.

He informed the Board that there were more charitable contribution requests this year than funds available to distribute, and sought direction on alternatives. It was determined that the matter needed further input and was therefore tabled to the October 5th meeting.

Lastly, he requested that a public hearing be scheduled for the October 5th meeting to receive comments regarding a CDBG-CV program application. This was approved.

After the open session ended at 7:27pm, but before the closed session began, Chairman Britt approached this correspondent to request that Bladen Online once again urge the County’s residents to complete their Census forms and return them by the end of the month.

Said Chairman Britt, “There are eight days left in this Census cycle. The Census Bureau has already stated that Bladen County may lose 2,000 people from the 2010 census. Each person not counted now equates to $1,600 annually over the next decade; that means the loss of as much as $32,000,000 in lost assistance by 2030!

“This money comes directly and indirectly to the County and our towns from Community Development grants, economic development grants, grants to pave streets, grants to aide senior citizens and the indigent, and much, much more! How many more millions we will lose depends on you, your friends, your neighbors, and everyone living in Bladen County.

“Our citizens desperately need this aid. So please tell everyone you know – this is crunch time! Please fill out your forms, either by mail or online. If you need help with the form, please don’t hesitate to ask someone for help. We cannot afford to lose this valuable financial assistance. Thank you so much for all your help.”

The Board entered closed session at 7:32pm, and upon exiting at 7:57pm, immediately adjourned with no action taken.