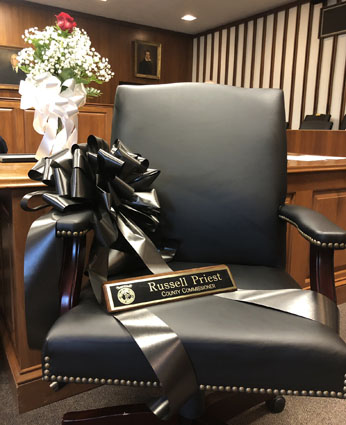 The Reverend Dr. Rudy Ramphal of Elizabethtown Baptist Church provided the invocation, and County Manager Greg Martin led attendees in the Pledge of Allegiance. With element 5A of the evening’s proposed  Agenda removed, the amended seven-item Consent Agenda was unanimously approved.

Chairman Peterson came around the dais and requested that the entire Priest family join him at the front of the Commission Chambers. Once gathered, the Chairman read a plaque honoring the family patriarch, the late Russell Priest.

He then presented the plaque, which was to be hung in a place of honor behind the Commissioners dais. Receiving the plaque, Russell’s wife, Doll Priest, tearfully intoned, “Thank you for keeping his legacy alive!”

Giving Ms. Priest a hug, Chairman Peterson, tears in his own eyes, guided Ms. Priest to the place of honor, where together they hung the plaque on the wall. A short reception followed in the Commissioners break room.

The remainder of the meeting, lengthy as it was, paled in comparison to the foregoing emotionally charged proceedings.

Partner Engagement Coordinator Tocarra Osbourne from Bladen Smart Start was in attendance to update the Board on the status of their partnership with Bladen, Columbus, and Robeson Counties. In 2020, they began the work on a Tri-County Community Prevention Action Plan.

This Plan is intended to address and raise awareness of adverse childhood experiences and trauma in the families of the tri-County area. It would also lay out strategies for building resilience in families, as well as building the capacity of community leaders and agencies to become child abuse protective factors.

Ms. Osbourne summarized the steps they have already taken to bring together public and private partners. These steps have led to a program named Resilient Bladen.

A grant from the Kate B. Reynolds Trust (KBR) helps pay salaries; they have additional applications with KBR and have also received a $250,000 grant to fund their Resilient Bladen program.

As part of that grant, they will bring a program called “Strengthen Families” to Bladen County. This is a non-referral-based activity that any family with children under five can attend for a 14-week family-based curriculum that includes the parents and the children.

In support of this vital program, the Commission passed ”A Resolution Supporting the Resilient Bladen – Community Child Abuse Prevention Plan” by unanimous vote.

In obviously coincidental contrast to a resolution supporting child abuse prevention, was a resolution requesting the Bladen Board of Elections to place on the 2022 general election, the question of allowing off-premises sale of beer and wine in the unincorporated county.

There were strident and heartfelt arguments, both for and against the resolution. Commissioner McGill, as a man of the cloth, argued vehemently against any sale of alcohol in the unincorporated county; Commissioner Ray Britt, on the other hand, was of the opinion that the decision should be left to the people.

Aligning with Commissioner Britt, Commissioner Munn-Goins agreed whole-heartedly that the choice should be left to the voters. When the dust settled, the resolution had passed on a 6 – 3 vote, with Commissioners McGill, Arthur Bullock, and Rodney Hester in the minority, voting nay.

Finance Officer Lisa Coleman presented the County’s financial condition two months into the Fiscal Year; she reported that revenues in the General Fund, the Solid Waste Fund, and the Water Fund at or well above projections; conversely, expenses in those Funds were well under budget.

Dr. Terri Duncan came to the podium to, first, request approval of a professional services agreement with Columbus County; her request was quickly approved.

She then presented proposed fee schedules for influenza vaccinations, and also for the Hepatitis A, TDaP, and Menactra vaccinations.

For the Beaver Management Program Advisory Commission, it was moved and seconded to reappoint all three members; Dan Ward, Ikie Guyton, and Ray Marlowe will remain on that Board until September 30, 2024.

Also unanimously reappointed to the Bladen County Watershed Review Board were Lorenza Graham, Terry Macon, and Gloria McLean. These terms will expire September 6, 2024.

Continuing in the do-not-change mood, Russell Patterson and Joyce Walters were unanimously reappointed to serve on the Voluntary Agricultural District Committee until September 30, 2024.

County Manage Martin provided a calendar review for commissioner information for the remainder of September and for the month of October.

Mr. Martin then announced that Building Maintenance Mechanic Wallace Stephens had retired on August 31st; also retiring that day was Martha Walker, Nutrition Site Manager with the Department on Aging.

He requested approval of a bid of $8,500, less the $3,000 County dues, from the Lumber River Council of Governments to provide a Bladen County Redistricting Project, This net cost of $5,500 was immediately approved.

He requested consideration to approve personnel policy amendments for both vacation and sick leave policies. As these are enhancements to those policies, benefitting employees, the request was approved.

Mr. Martin then provided an update regarding a Digital Inclusion Plan from the NC Department of Information Technology to assist the county in closing the digital divide. Additional information will be forthcoming.

His final request was approval of two resolutions to contract with 4-County EMC for financing a new garbage truck, a new ambulance, and ten new Sheriff’s patrol vehicles. Both resolutions were unanimously approved on a single vote.

Anthony Thomas, who had spoken during the earlier public hearing, requested to speak to explain his earlier comments as regards the Covid19 vaccine issue; Chairman Peterson, however, told him that private agencies should not be giving the vaccines: That is the responsibility of the County Health Department.

The Commission voted at 8:10pm to go into closed session for the purpose of discussing real estate purchase negotiations. At 8:24pm, the Board re-entered open session and, without discussion, immediately adjourned.