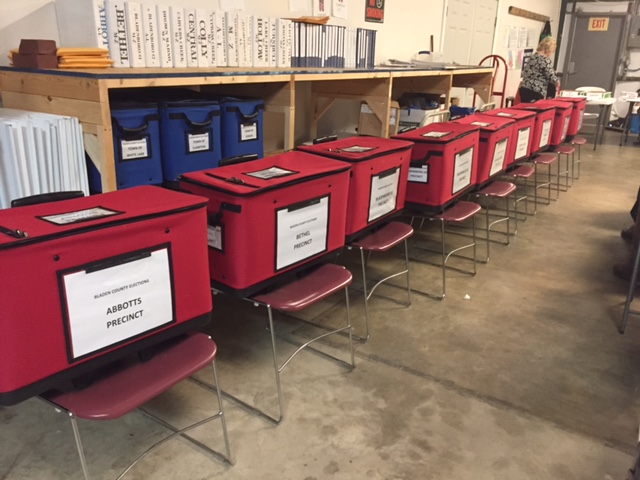 5 were indicted in alleged ballot fraud scheme. A week later, 3 have been arrested

What happens next in North Carolina congressional race re-do?

WECT: WATCH LIVE: Day 4 of the election fraud hearing for NC9 in Raleigh

Hearing into unresolved US House race could find winner | WLOS

The Latest: Bladen political operative instructed worker not to testify against him in 9th District hearing | WRAL.com

NC election fraud case: How many ballots are in question? | Raleigh News & Observer

9th District: 1 in 5 counted absentee ballots were handled by people linked to Dowless|WRAL

If congressional race deemed tainted, will redo get support?

Appointments to Bladen County Board of Elections tabled

WRAL |State elections board in closed session on 9th District

When is the hearing in 9th district election investigation? | Raleigh News & Observer

New NC elections board won’t start for a week. But it’s already deep in controversy

Foes, then partners, foes again: Bladen politicos on opposite sides of election fight

Judge refuses to certify Mark Harris as winner of District 9

Elections Board Responds To Harris Campaign: We Don’t Need Formal Protest To Investigate

US House may ultimately decide winner of District 9 race

Hearing scheduled in dispute over rightful sheriff of Columbus County

Who is to blame that Bladen County election fraud went on so long?

What’s The Holdup In That Unresolved North Carolina House Race?

Fight over NC 9th District election could drag on for months, with no one seated

Who is the rightful sheriff of Columbus County? Answer could come in court

During shutdown, water samples to check for GenX are sitting in the fridge untested

‘No reason to doubt the legitimacy of the outcome,’ Harris says as he sues to join Congress

Candidates, PAC in Bladen County disagree on meaning of contributions

Candidates, PAC in Bladen County disagree on meaning of contributions

GOP legislative exploits do not cease

DISTRICT 9 VOTES: Votes not recorded for three people who handed their absentee ballots to strangers

DISTRICT 9 TIMELINE: US House District 9 race investigation: How we got here

Hayes Responds To Cooper’s Decision Regarding “Interim” Elections Board

Mark Harris to meet with NC elections staff this week

Dan McCready: Calls for 48 subpoenas by elections board

Man in Bladen County ballot probe declines to talk to board

Ballots may have been stolen or destroyed in disputed N.C. House race

Fight over North Carolina race set to drag on for months

Do it right; do it over

These NCGOP tweets on disputed election may be irrelevant. But they’re mostly true

We knew about possible NC ballot fraud in ’16. Why didn’t we stop it? | News & Observer

Journalists have done great work on the Bladen County voting story. Keep it up.

[Greensboro News & Record] Our Opinion: What’s not ‘cool ‘ in this state is political dysfunction

Elections board: Bladen DA had ‘undisclosed apparent conflict of interest’ when he sought investigation info in ’17

State says Columbus County Sheriff should not have been sworn in

NC election dispute to leave 773,000 without voice in Congress: ‘It is a great loss’

Ballot fraud in Bladen County: Bending the rules is nothing new

N.C. congressional candidate sought out aide, despite warnings over tactics

North Carolina Democrats in Congress: No new primaries for District 9

In the 9th District, a new primary might draw a crowded field for disputed seat

From the News and Observer:  ‘The guru of Bladen County’ is at the center of NC’s election troubles

Journalists have done great work on the Bladen County voting story. Keep it up.

Distrustful, Desperate and Forgotten: a recipe for voter fraud by Michael Graff

From Greensboro News and Record: GOP House candidate would back new election if fraud show

Bladen County: State Board of Elections issues subpoenas to Harris campaign, others in 9th District flap

From WRAL: Updated 12/12 Affidavit: Man at center of 9th District investigation had hundreds of ballots

From WSOC TV: Man at center of election fraud investigation has criminal past

NC elections board refuses to certify 9th District race, leaving it in limbo

In 2 NC counties, election fraud claims are nothing new

Who is Leslie McCrae Dowless?

From Popular.info:  Vice Chair of Bladen County Board for Elections Abruptly Resigns

My short view: On voter fraud in Bladen and beyond

No date for hearing on alleged election irregularities in Bladen County

Ballot envelopes seized from Bladen County Board of Elections