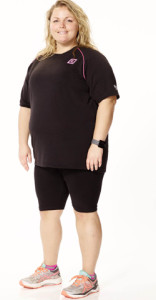 Bladenboro’s Lauren and Vicki Clark will be part of the cast for the Biggest Loser’s Season 17 that will begin airing Monday, Jan.4 at 9 p.m. on NBC (WECT, Channel 6).

Vicki is a women’s health nurse practitioner and Lauren is a nutritionist. Bladenonline sat down with Lauren for a question-and-answer session that follows. (Bladenonline ran an interview earlier with Vicki).

Bladenonline: How did you come to apply to be on the Biggest Loser?

Lauren: I had applied to be on ‘The Biggest Loser’ for 3 years in a row and had received a callback the last 2 times but had never gone any further than that. I had not planned to audition this year for two reasons. First I had started to lose weight through Crossfit and didn’t think I needed the show and secondly it was couples this season and I didn’t have a partner.

At the last minute a friend of mine won a ‘front of the line pass’ to the casting call in Raleigh and she needed a partner so I thought, why not? After a VERY short group interview, she and I received a call back for a follow-up one-on-one interview the next day, so back to Raleigh we went.

Two weeks later I received an email from one of the casting producers asking if there was anyone in my family that needed to lose weight because the show’s producers were looking for family teams. I suggested my mom, they set up a Skype interview with us and after TONS of paper work and emails back and forth we were invited to California and the rest is history!

Bladenonline: Were you familiar with the Biggest Loser show?

Lauren: I had watched ‘The Biggest Loser’ with Momma over the years and we were both fans of the show.  However I had stopped watching a few seasons ago because it felt like the same thing year after year just different contestants. I’ll definitely be watching this year though.

Bladenonline: Were you surprised that you were chosen?

Lauren: I didn’t allow myself to get my hopes up even when we were in the casting process for 3 weeks in a hotel in California.  As our time in California got longer I started thinking we might actually have a shot at this, and for some reason everyone loved us, especially Momma!

Bladenonline: What were some of your biggest concerns with being on the show?   Traveling to California?  Time away from family?  Rigors of being involved in the work-outs and challenges?

Lauren: My biggest concern going on the show was the time I was going to be away from my son, Caleb, who is 8 years old. It’s been just me and him since he was born and the most time we’ve spent away from each other was 4 nights when I had to go to training for work (but even then it was never out of state).

I was also nervous about the flight out to California (I had never flown before) and let’s just say if it wouldn’t have taken a week to drive home I would’ve asked my daddy to come get me instead of flying back to NC.

I wasn’t worried about the physical challenges as much as the emotional and mental challenges we were going to face. I also don’t like to cry or talk about my feelings so the anticipation of that gave me a lot of anxiety.

I wasn’t really concerned about the physical challenges because even though I’ve gained a lot of weight over the years I’ve remained active through church softball, teaching Zumba, and participating in Crossfit. I do hate cardio though, I’d much rather lift heavy things.

Bladenonline: So you went with your mother, what was that like?

Lauren: After the amount of time that we had to spend together, I was glad I was with family. Even though we were far, far away from home, having momma there was like having a little bit of home with me.

Bladenonline: Once you got to the ranch, how was your time spent? Work-outs? Other exercise? Diet?

When we got to the ranch we were immediately thrown into a workout, and after that on days we were filming we’d be filming for 12-14 hours a day. On ‘dark days’ (no filming) we worked out 8 or more hours a day. We did all kinds of workouts from swimming to boxing to cross fit.

We were given a ‘calorie budget’ and had to prepare and cook our meals as well as packing our meals on days we were filming away from the ranch. Even though we didn’t have to purchase our food we still got ‘real world’ practice by learning to prepare our food, plan ahead, and use food for fuel instead of eating out of boredom or for emotional reasons.

Bladenonline: How did you hold up physically? Did it get any easier after time?

Lauren: Physically I was ok the first couple of weeks, but after time working out every single day without any true rest days began to wear on me, and I developed shin splints and back pain. It was frustrating because I was one of the healthier contestants there.

I didn’t sleep well the entire time I was there until the last week or so when my trainer suggested I start doing ice baths every night. Those were MISERABLE but an ice bath after a long day followed by a hot shower and jumping in the bed made for a good night sleep.

Bladenonline: How about the time away from family? How did you work through that?

Lauren: Being away from family was difficult, especially being away from my son. Fortunately though, we were so busy most days that you really didn’t have time to miss them. Well, at least until it was time to go to sleep which made for many a sleepless night.

Bladenonline: Did you start to notice a difference in your health after you had spent some time on the ranch?

Lauren: It was difficult at first to tell a difference in my health while I was there because it was hard for me to see changes in myself.

I could definitely tell I was getting more physically fit, which was good and bad. Good for obvious reasons, but bad because we were required to burn a certain number of calories/day and as you become more acclimated to workouts the harder it is to burn calories.

Bladenonline: Any highlights or memorable examples from your time on the Ranch that you can talk about?

Lauren: Some of the most memorable experiences on the ranch were challenge days. We definitely had some exciting and entertaining times doing those. The crew (camera, audio, etc.) were awesome and made our time there much more bearable.

Some of the best times though, were spending time with my team:  in the pool logging hours and trying to hit our calorie burns, listening to Colby Wright’s stories about hunting with his wife Hope, and the Hernandez twins explaining Mexican dishes we just had to try once upon leaving the ranch.

Bladenonline: How was the interaction with the other cast members, if you are allowed to talk about it at this time?

Lauren: I got along with most of our cast but was closer to my teammates who were more like family.

Bladenonline: How has the whole experience affected your life? Any learnings that have helped you with your diet or work-out regimen?

Lauren: This experience has changed the way I look at what’s important (being away from family) as well as made me appreciate our military more.

It’s changed how I view food and workouts. Before I went to the ranch I used food for comfort instead of dealing with whatever the issue was. Once we were on the ranch I had to deal with my emotions instead of numbing them with food.

It also made me appreciate being able to lift weights! The name of the game on the ranch was weight loss so weights were frowned upon and cardio was king. Let’s just say I’ve been making up for lost time in the weight room.

Lauren: California is A LOT different than North Carolina. The people there are really nice, however for it to be sunny all the time it’s an extremely dark place. I think in addition to sending missionaries to third world countries we may need to place some on the west coast as well.