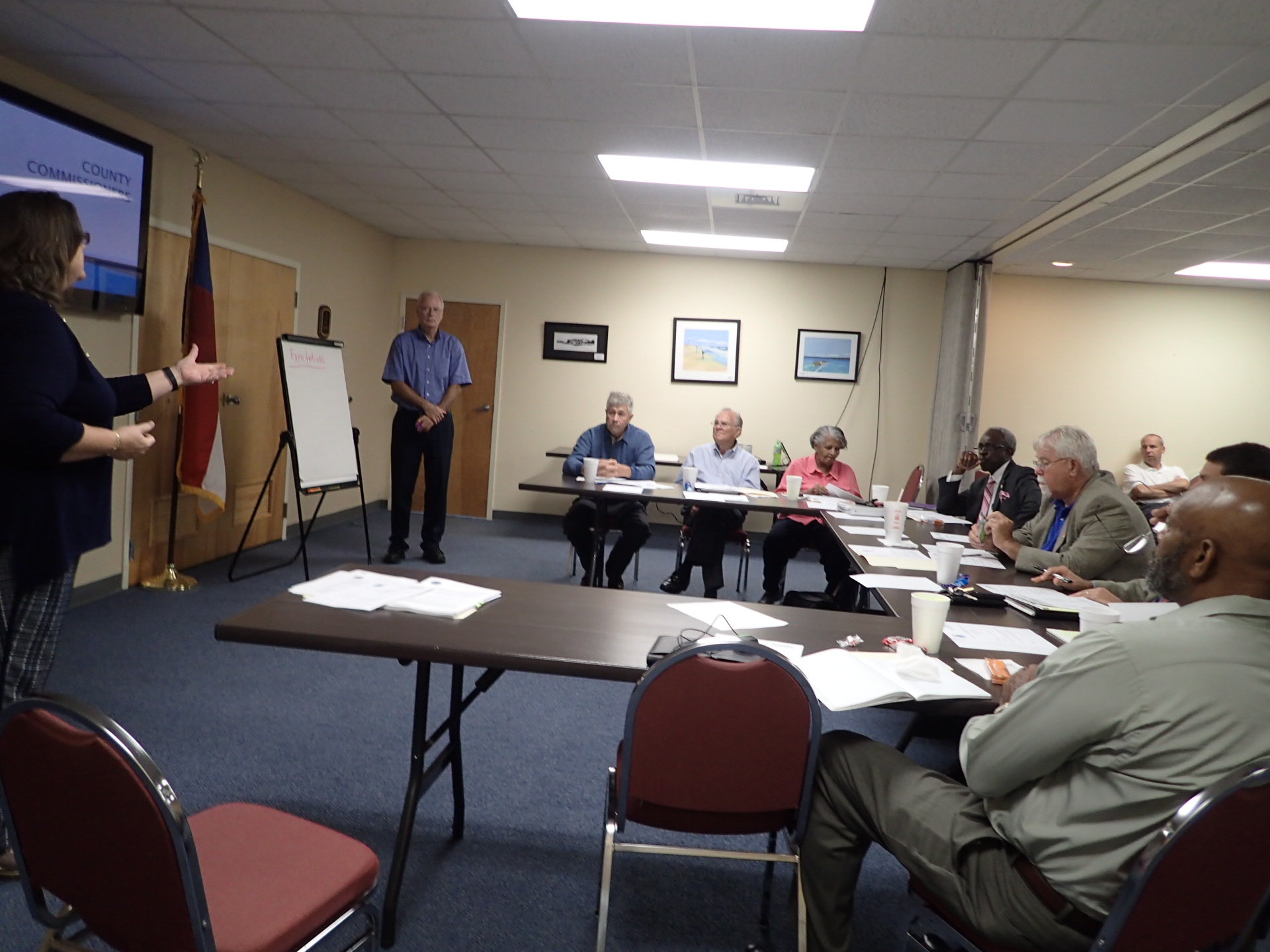 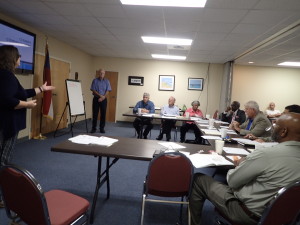 The Bladen County Board of Commissioners along with County Manager, Greg Martin had a training session about working together and as individuals, in their official roles at the special meeting on Monday night, with the guidance of Jan Maynor and Jim Perry from the Lumber River Council of Governments. The special meeting allowed the commissioners to approve the Community Development Block Grant (CDBG) new documents before going into the presentation part of the meeting.

After the official business was taken care of the group then had the opportunity to learn the roles and responsibilities of the Board of Commissioners and Staff, while creating an environment for discussions on how the board can work as a Body to better serve their community.

Maynor from the Lumber River Council leading the learning session said, “This presentation is to cover the roles and responsibilities of the County Commissioners and the Staff, so we can be more effective in our relationships together.” Commissioners Cogdell, Blanks, Bullock, and Peterson all announced their expectations of the meeting.

Cogdell said, “I would like to clarify the roles and expectations of the Board of Commissioners and find out what are our policies and procedures, or if we have any.”

Bullock concurred with Cogdell and said, “What is our SOP?” Cogdell and Bullock, two of the newest board members, explained some incidents where they felt they did not have enough information to proceed with a vote and they felt procedures in place may help prevent these types of things from happening.

Martin, County Manager, reminded the board, “In 2015 this group did vote to pass procedures.” Martin told the commissioners he would send those approved procedures out again for the group to review and discuss later. Martin also said, “I will do a better job at making sure we communicate better.”

Dr. Blanks said, “I would like to know what our communication roles are in Educations?”

Peterson stated, “We as commissioners should do our homework.” He then asked, “What is our role as far as working with the Board of Education?”

Maynor then started the presentation educating everyone in attendance with a fun game, nuggets of facts and helped lead much needed discussions. The roles of the Board of Commissioners according to Maynor are to represent the views and needs of the citizens, enact local ordinances, set policies, determine a mission, solve public problems, make, promote, and communicate rules.

Maynor explained the need for a County Manager and the history of the position. According to Maynor the first County Manager hired was in 1929 working for our neighbor, Robeson County. The explanation for a manager, Maynor said, was to run our local governments more like a professional business. The examples Maynor gave of how a manager helps run a county more like a business is first, managers help reform corruption.

Maynor also explained elected officials are voted for in large part due to popularity, but managers serve at the pleasure of the Body (the Board of Commissioners), which means, the manager should be chosen based upon his experience, knowledge, and ability to do the job. Also she pointed out the manager insures the county will not be leadership void.

The manager’s responsibilities are operation of services and functions, preparing, presenting and implementing the budget, employing, and serving as an advisor to the board according to Maynor.

The officials then learned the proper role of the Board of Commissioner’s Chair according to information in the presentation. The Chair does not have veto power, and has no executive power. The  Chair person can declare a State of Emergency and works as the Coach of the Board.

The Chair also presides over meetings, is the time keeper, focuses on the job at hand, pays attention to the Body’s feedback, and avoids conflict by introducing important issues and then not asking for a vote on the same night. The Chair also acts as a liaison for the Board of Commissioners. according to Maynor.

Maynor said, “Leading elected officials can be like herding cats.” She then asked the group, “Can you disagree without being disagreeable?” She encouraged everyone at the table to manage conflict constructively.