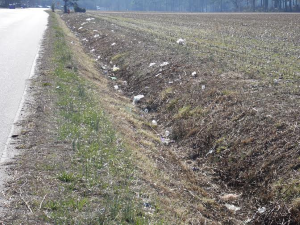 Trash found along the county’s roadways was the focus of a discussion at the Bladen County Board of Commissioners meeting.

Bladen County Commissioners Chairman Charles Ray Peterson told the board that he received a telephone call from a person who was driving through the county and they were complaining about the trash throughout the county.

“He travels all over the state. I won’t use the words he used, but he wanted to know if the Commissioners cared about how our county looks as far as cleanliness and such,” said Commissioner Peterson.

He said he explained to the caller that the Bladen County Sheriff’s Office has a work crew that picks up trash as part of their assignment. Chairman Peterson said he also told the caller the County Planning Department works to clean up dilapidated mobile homes and items of that nature.

“He said of all the counties he drives through, Bladen was the worst,” said Chairman Peterson. “He said it was the worst county he has ever rode through as far as couches and litter and everything else beside the road.” 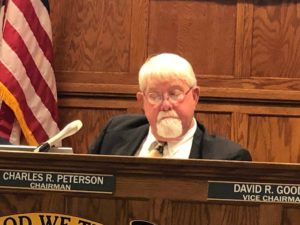 Chairman Peterson said he is aware the State of North Carolina only cleans the main highways. He told the board he has asked the grant writer if there are any grant funds to add a mobile unit to help clean up the county.

“Was this problem before the hurricane or he didn’t say?” asked Commissioner Bullock.

“I assume it was before,“ said Chairman Peterson.

“He was talking about the entire county. He said he travels the whole county and across the state of North Carolina,” said Chairman Peterson.

Commissioner Munn-Goins said she agreed. She commented that many areas of the county have couches, beds and other debris scattered along the roadside and she has been in contact with County Manager Greg Martin about the matter.

“People are throwing stuff out because they don’t want to pay because it costs them for it to go into the landfill,” said Commissioner Michael Cogdell.

He suggested the county look at offering a day where the County waives the disposal fees.

“The drink bottles and paper, the landfill doesn’t have anything to do with that being thrown out,” said Chairman Peterson.

Martin reminded the board that since Hurricane Florence struck, residents have been instructed to place their debris beside the road and NC Department of Transportation (DOT) will pick it up.

“I don’t think that is what he was talking about,” added Martin. He added he does have an update from Kenneth Clark with NC DOT. In his update to the board, Clark said DOT expects to have completed all of the storm debris removal in Bladen County by the end of January. Clark’s update stated DOT has completed their debris removal, in the Natmore and Kelly areas and along NC 210.

Chairman Peterson clarified, the caller, who asked not to be identified, was not talking about storm debris. Rather, he was talking about illegal dumping, dilapidated mobile homes and trash being thrown from moving vehicles.

“Maybe we need to educate our citizens, if they see something say it,” said Chairman Peterson.

He asked for suggestions from the Board of Commissioners. 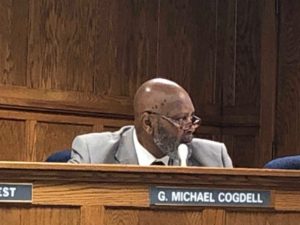 Commissioner Michael Cogdell suggested having the water department personnel when they are out reading meters to make a report if they see litter in an area of the County.

“I brought this up last year,” said Commissioner Ray Britt. “We talked to Mr. Elkins (County Planner Greg Elkins) about it. I’m really concerned about it.”

He pointed out how this issue can not only affect the appearance of the county but can also devalue neighboring properties.

“We’ve got things that are in place. We need to go back and look at the zoning and maybe we need to make some changes. We do have some destitute situations and I’m glad I’m not the neighbor,” said Commissioner Britt.

He pointed out the County has been working for two years on a property near Mary Lennon’s residence. Commissioner Britt said there is a home near that location that was heavily damaged in a fire two years ago that needs to be cleaned up.

“It was brought up that we can take care of that in another way through the Health Department,” said Commissioner Britt.

Martin told the board the County does not have a minimum housing standard code of ordinances in place. He suggested discussing the matter further at the Commissioner’s annual retreat. The board agreed to review the matter at the annual retreat.