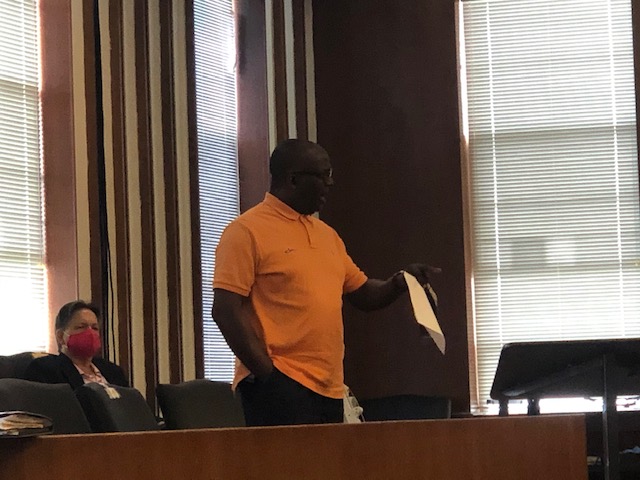 The Bladen County Commissioners and other local leaders organized a meeting to address community concerns. The Local Working Group meeting was held at 2:00 p.m. on Wednesday, July 8th, 2020 in Bladen County Courthouse, Superior Courtroom. The purpose of the meeting was to begin dialog regarding various issues and concerns including social/economic, judicial/law enforcement, and race relations. David Richardson, Executive Director of Lumber River Council of Governments facilitated the meeting.

Topic areas for discussion included the following: Social and Economic Disparities, Judicial and Law Enforcement, and Race Relations. Individuals in attendance were given opportunities to voice community concerns on the topics that included revisiting the meanings of equal protection, equality, institutional racism, systemic racism, and the importance of developing relationships.

Bladen County Manager, Greg Martin, and Bladen County Commissioners, Dr. Opheila Munn-Goins, Chairman Ray Britt, Arthur Bullock, Michael Cogdell, and Charles Ray Peterson were all present. Mayors from Clarkton, East Arcadia, and Elizabethtown were present. The Chief of Police from Bladenboro, Elizabethtown, and White Lake along with the Bladen County Sheriff and other law enforcement officers were seated for the discussion. District Attorney John David and Chief Proctor, Quintin McGee, addressed concerns at the meeting. Other residents from the area were in attendance. Bladen County Schools and Bladen Community College were also represented at the meeting.

Chairman of BCC’s Board of Trustees, Dennis Troy, asked for an explanation about the Lennon Lacy death. He said his daughters have expressed fear due to rumors about Lacy’s death. Read an article about the rumors of Lacy’s death here: https://www.dailymail.co.uk/news/article-2878148/amp/White-girlfriend-31-lynched-17-year-old-says-believes-relationship-led-murder-reveals-warned-not-date-black-man-Crackertown.html

Jon David, BC District Attorney said, “This is by far the most comprehensive death investigation in my career.”

He continued, …”All of us were unanimous in the decision this young man committed suicide. I will tell you that if I felt differently about it, it would be my life’s ambition do something about this.”

Bladen County’s Chief Prosecutor,  Quintin McGee said, “This case has gone to the highest level of investigation. When you look at the manner in which he died… it’s troublesome.” McGee confirmed Lacy’s death was a suicide.

He continued, “If my brother died today and was hanging from a swing set it would be hard for me to accept. Suicide and mental health are things that are difficult to talk about.”

In closing, McGee said he would direct anyone interested in the facts of the case to an article written by Steve DeVane in the Fayetteville Observer.

Following is the article McGee referenced.

There was a request for the community to come together and partner to raise our own boys and girls and prepare them for Bladen County’s future. Developing career interests should begin in the Elementary School and continue through Middle and High School, according to Commissioner Dr. Munn-Goins.

A man introducing himself as George Floyd’s cousin said he appreciated the Coffee with a Cop event recently held at Cindy’s restaurant in Elizabethtown by the police. He had two concerns. First, he said there should have been more minorities in attendance at the event. The second concern he addressed was he felt there weren’t enough minorities in law enforcement.

Commissioner Bullock stated his experience in recruitment. White Lake Police Lt., Mike Salmon, and Bladen Community College President, Dr. Amanda Lee, both stood and addressed recruitment concerns and issues and asked the leaders in attendance to help them get the word out about the training and employment opportunities available to the minority communities.

The importance of the Substance Abuse Task Force was mentioned. Commissioner Peterson, Chairman of the Task Force explained the issues the group has had recruiting minorities to join the efforts.

Citizens Sabrina Murchison expressed her desires and plans to start a new digital and print publication to help communicate with the minorities. She said anyone wanting to submit information may email her at smurchisonscmhc@aol.com.

Commissioner Cogdell said he would like to have subcommittee meetings. Those in attendance organizes those meetings.  The next steps include the following meetings to be held at Bladen County Courthouse in the Bladen County Superior Courtroom at 4:30 p.m.: July 17th- Education; July 21st-Judicial/Law; July 28th-City/County.