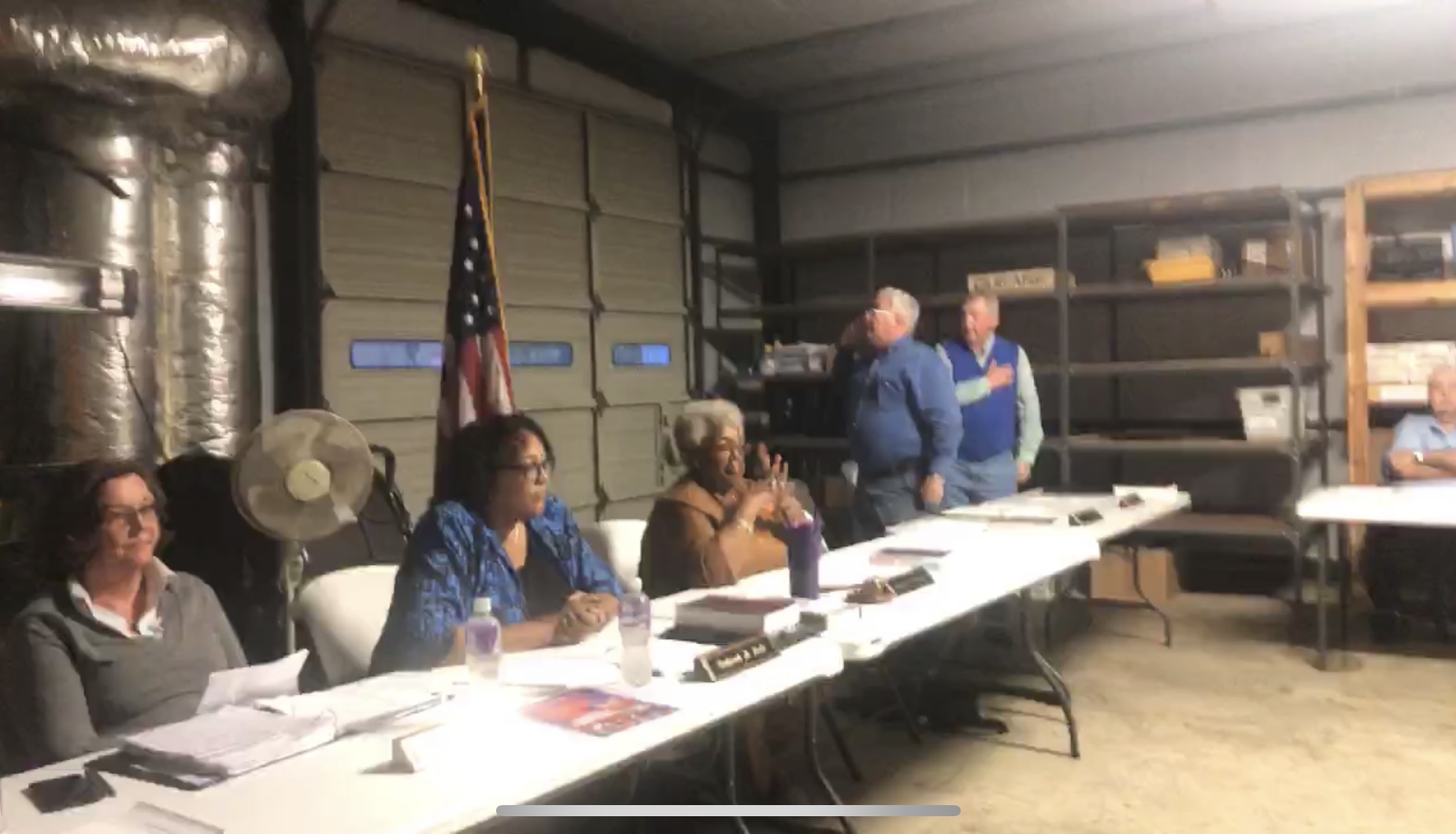 The Bladen County Board of Elections held a regularly scheduled meeting on Tuesday, January 14, 2019 at the local office located at 301 S. Cypress Street in Elizabethtown. The meeting ended with threats of law enforcement being called to the next meeting.

When Chairperson Thompson was asked why she would vote against the Pledge of Allegiance by a fellow board member she did not respond. When she was asked the same question again by BladenOnline.com staff she responded by saying, “That’s my right and I exercise it.”

After the approval of the minutes Chairperson Thompson asked for individuals wishing to address the board to speak. After some passionate objections from members in the audience about the board voting against placing the pledge to the flag, Dwight Sheppard, husband of board member Patsy Sheppard rose to his feet and voiced his opinion on why the board should not add the pledge to the agenda.

As Sheppard stood he said, “…That is every single State board in the State of North Carolina does not say the Pledge of Allegiance before their meetings it is not allowed in State meetings.” He closed in reference to the pledge in State board meetings saying, “Never, never, never quoted.”  (Mr. Sheppard, sued Bladen Community College some years ago. Mr. Sheppard also made threats to sue  Bladen County in October, 2019 when the Bladen County Board of Commissioners voted not to pay for his wife, Patsy Sheppard’s attorney. The request for the county to pay for Mrs. Sheppard’s attorney stemmed from a formal complaint filed against her with the North Carolina Board of Elections.)

After Sheppard spoke, Bladen County resident and business owner, Daine Smith stood to address the board.  Smith explained he was unaffiliated and the issue did not have to do with party affiliation, but about respect for the flag and others’ rights. Smith then announced he would be citing the pledge if anyone would like to join him. As the majority in attendance stood and recited the pledge, the three democratic board members: Chairperson Thompson, Sheppard and Ms. Bell remained seated.

After the pledge was said Smith was reprimanded by Chairperson Thompson and then Sheppard called for a short recess. After the board returned the agenda items were addressed.

The action items on the agenda; approval of One-Stop Workers and approval of Election Day Workers were both approved after some discussion.

Director of the Bladen County Board of Elections gave dates for upcoming trainings and the board went into closed session citing personnel matters as the reason.

When the board reconvened Chairperson Thompson announced, “There are some personnel issues and there is a position we will be advertising for and we also discussed the disruption of the meeting.” She added, “At the next meeting if that happens again law enforcement will be called, so because it is against the law to disrupt a meeting that is going on and that is what happened today with the reciting of the pledge.”

The meeting was then adjourned.

The Bladen County Board of Elections meetings are held the second Tuesday of each month at 5:00 p.m. at 301 S. Cypress Street in Elizabethtown.

Update: Governor Roy Copper  appointed Chairperson Thompson and Sheppard to the Bladen County Board of Elections. Therefore, BladenOnline.com reached out to Gov. Cooper by phone on Wednesday afternoon for comment.

On Wednesday evening at 8:10 p.m. Gov. Cooper’s office responded with a statement by email attributable to Communications Director Sadie Weiner:

“The Governor leads the Pledge of Allegiance before every Council of State meeting. He doesn’t agree with the action taken and he thinks it’s a good practice to say it before a Board of Elections meeting.”

Board members are sworn in every odd year. They serve two-year terms. There are usually five members, with no more than three being from the same party. The Republican and Democratic party chairs in the county nominate persons to serve on the board, and then the State Board of Elections or the NC Governor appoints the members.

BladenOnline.com also received an email from the office of Congressman Dan Bishop (NC-09) about this issue. Congressman Bishop stated, “I was appalled that the Chairwoman of the Bladen County Board of Elections will prevent board members—on threat of arrest—from reciting the Pledge of Allegiance. It shows a twisted moral code to oppress the right to honor a flag that stands for freedom from oppression. I stand with the board members who continue to revere and respect our flag and those who lost their lives defending it.”

Not only are elected officials speaking out against the actions of the three board members, there are some raising questions about laws being broken.

The law Chairperson Thompson alluded to being violated was § 143-318.17. which states, “A person who willfully interrupts, disturbs, or disrupts an official meeting and who, upon being directed to leave the meeting by the presiding officer, willfully refuses to leave the meeting is guilty of a Class 2 misdemeanor.”

However, as the video shows the pledge was recited during the part of the meeting when Chairperson Thompson opened the floor to those in attendance giving each person in attendance permission to address the board.

The minutes during the closed session where the pledge was discussed should be made public.

Bladen County Board of Commissioners battle over legal matter