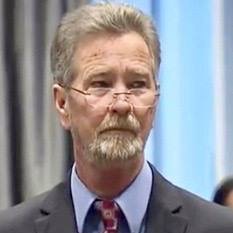 A man who the NC State Board of Elections called a person of interest in a months long investigation into election irregularities that ended with a unanimous vote by the board to call for a new election for the 9th Congressional District, started a Go Fund Me account seeking donations for what he calls his “legal defense fund.”

McCrae Dowless, a fixture in Bladen County elections for a number of years, started the Go Fund Me site on Wednesday with a goal of raising $100,000. As of Friday morning, the page showed no one had made any donations.

The week after the Go Fund Me Page was started using the photo above of Dowless the page can no longer be found. On Tuesday morning the search for the fundraising page for turned back void. Continued attempts to reach Dowless have been unsuccessful at the time of publication.

Dowless, under advice from his attorney, did not testify at the evidentiary hearing conducted by the NC State Board of Elections.

“We are still compiling receipts, etc., so those figures are not immediately available, but we’re working on it and they should be available fairly soon,” said Gannon.

Gannon said, “The State Board determined that the same absentee voting irregularities that affected the 9th Congressional District also could have affected the outcome of those races because of relatively tight margins.”

But, he said the margin of victory in the Bladen County Sheriff’s race was wide enough that the irregularities in the absentee ballots did not affect the outcome of that particular race.

Investigators introduced evidence during the hearing regarding the fact Harris’ campaign paid $130,000 to Red Dome between July and November 2018. Kimberly Strach, the NC State Board of Elections Executive Director,  said that Dowless paid volunteers $125 for every 50 mail-in absentee ballots they gave him.

Republican candidate Mark Harris testified on Thursday about how he first met McCrae Dowless through friends. Dowless was hired by Red Dome in April 2017 to assist the Harris campaign in Bladen County.

I had to attend a hearing this week at the N.C. Board of Elections, and it is clear that I am being portrayed in a negative light, and they are making it look like I got a lot of money, but that is not true.  My salary barely covered my gas and expenses and the majority of the money was paid to other people working for the campaign.”

Dowless also alleges that Mark Harris’ son, John Harris, who is a federal prosecutor in Raleigh, turned against his father.

Dowless continues, “I am sure I am going to have many more legal battles to face.  I have also been told I may have to go to Washington D.C.  to answer questions from the democrats. Everybody keeps trying to vilify me because I got in some criminal trouble over 20 years ago.”

He also alleges that he does not have the money necessary to defend himself. Dowless is also claiming on the Go Fund Me page he has also had health issues in the recent past.