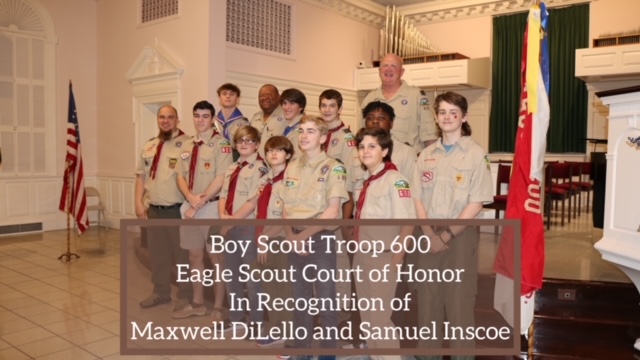 Watch a video of the ceremony on the YouTube Channel linked below:

Family members, friends, Scouts, and mentors gathered at Elizabethtown Presbyterian Church to celebrate the two young men and their accomplishments. Before the pair of rising Scouts declared the Eagle Scout Promise, Troop 600 led the Presentation of Colors, the Pledge of Allegiance, Scout Oath, and the Stages of Scouting.

Eagle Scout David Bullard explained the past, present, and future of the Eagle Scout rank. Since its inception in 1911, only about three or four percent of Scouts have earned the status of the Eagle Scout. It is a classification that sets those who obtain the level apart and on a higher footing.

Then Bullard charged DiLello and Inscoe, “Keep your solemn oath to your god, your country, to your fellow Scouts, and to mankind in general.” 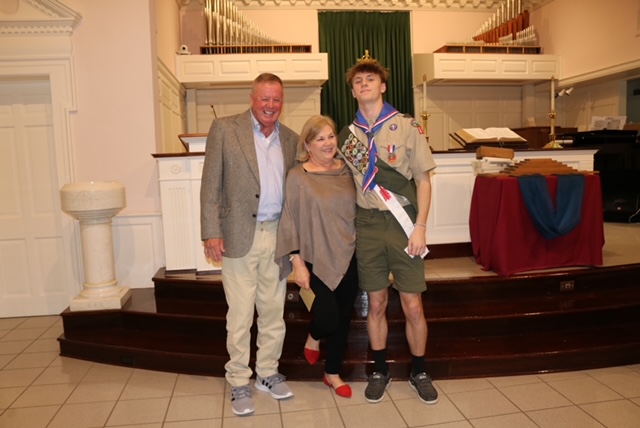 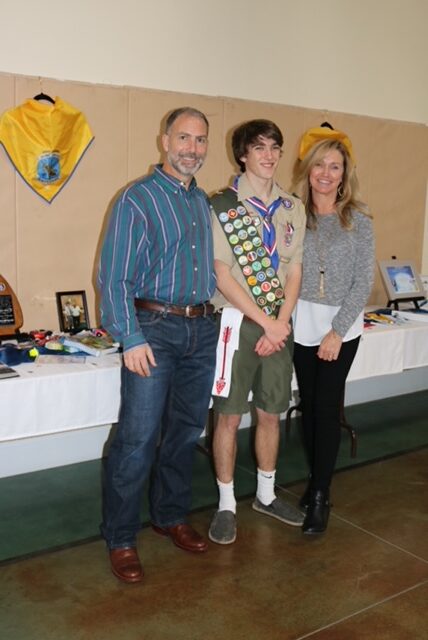 Eagle Scout DiLello presented his parents, Michael and Trisha DiLello, with pins to acknowledge their support and sacrifice for him. He also gave his mentor from Elizabethtown Christian Academy, David Falk, the Guiding Light Pin Award.

“This is for putting up with me for several years and helping me throughout school…,” Eagle Scout DiLello told his mentor.

To show gratitude for his parents, Eagle Scout Inscoe presented his father and mother, Graham and Trish Inscoe, with pins.

As he awarded his mother, Trish, with the Guiding Light Pin as well, he said, “I want to thank you for everything you have done for me. You helped me push to the end, and I wouldn’t be standing here today if it wasn’t for you.”

In closing, Reverend David Holloway spoke about the many prayers lifted for DiLello and Inscoe and how proud he was of them both. With loud applause, the ceremony concluded, and everyone in attendance was invited to a reception in the Activity Building of the church.