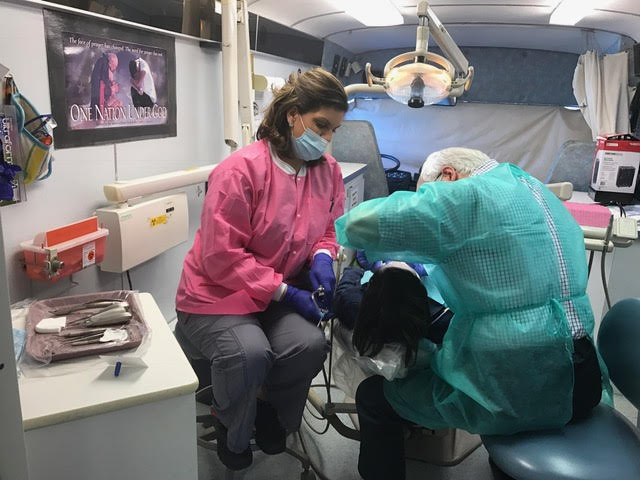 On the first day of autumn in 1974, Dr. Charles Davis Allen, Jr. started his dental practice located on East McKay Street in Elizabethtown. Now today, September 23rd, Dr. Allen is celebrating 45 years of service working at the local office, according to his staff members.

Dr. Allen, a Bladen County Native graduated from Elizabethtown High School and then earned his doctorate at University of North Carolina Chapel Hill. He worked in Chapel Hill before coming back to Bladen County to open his practice, according to his office manager, Mrs. Stephaine Bryan.

Dr. Allen, a devoted family man worked with his wife by his side. After she spent time raising their daughter, Blake and a son, Davis, she filled the role as office manager. Now, Dr. Allen employs eight people at his practice.

Mrs. Lori King who has worked with Dr. Allen for more than 39 years reminisced about their work over the years. The friendships are what has made working at the practice special, she shared.

Mrs. Allen was closer than a sister, and Dr. Allen has a true concern for his patients, Mrs. King added.

“He does not just care about their dental health, but their overall health as well,” she said.

Dental assistant, Mrs. Amanda Lancaster said, “He doesn’t need to advertise because he has such a large practice already.”

A lot of people do not want to be referred out, so Dr. Allen is continually striving to be better and to further his education, Mrs. King explained. He attends continuing education classes. Dr. Allen  does root canals, orthodontics and implants, along with general dentistry services.

Amy Lewis another member of the practice shared about Dr. Allen’s generosity and his love for his alma mater, UNC Chapel Hill.

Dr. Allen volunteers his time to the North Carolina Baptist Men’s Dental Bus missions, he is an active member at Elizabethtown Baptist Church, and can be found supporting his team on game days.

Mrs. King said if he will pull another five years he will celebrate 50 years of service.

Mrs. Bryan said, “I am trying to get him to keep on for at least four more years because then I will celebrate 20 years working with him.”

Dr. Allen, voted Best Dentist in Bladen County, was busy with a patient when we stopped in for the interview. While his staff paused to express their admiration for Dr. Allen, he continued to work.

The devoted dentist can be found at 508 E. McKay Street in Elizabethtown. For more information or to schedule an appointment with the beloved Dr. Allen you may call 910-862-4334. 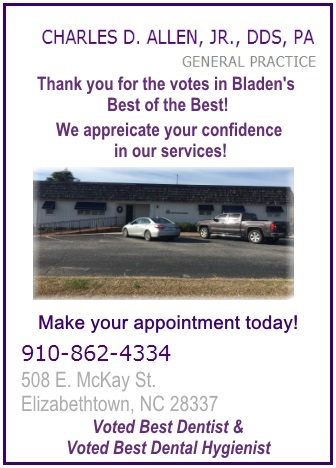