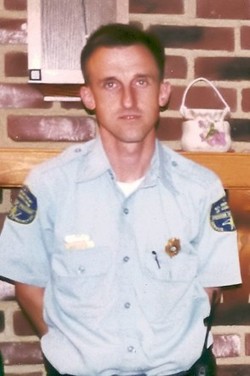 Take the survey about the issue now by following the link below.

For the second time, after two years of paperwork and an investment of $2000, the family of the late Lieutenant Ronald “Ron” P. Allen Junior was denied a unanimous vote by the Bladen County Board of Commissioners to have a bridge named in honor of the fallen Firefighter. Lt. Allen died in September of 2006 while serving the county by marking fire hydrants.

A public hearing about naming the bridges spanning Reedy Meadow Swamp located on NC 87, north of Dublin, in the memory of the late Tar Heel Volunteer Firefighter, Lieutenant Ronald “Ron” P. Allen, Jr, was taken off the agenda last week at the Bladen County Commissioners’ meeting.

Commissioners Mr. Arthur Bullock, Mr. Michael Cogdell, and Dr. Ophelia Munn-Goins were not in-person at the meeting but counted present by conference call. When Lt. Allen’s mother, Mrs. Alice Allen, stood to address the commissioners last Monday, Mr. Bullock disabled his video while speaking to his daughter. Dr. Munn-Goins also disabled her video during Mrs. Allen’s address, and Mr. Cogdell was only available by audio reception. 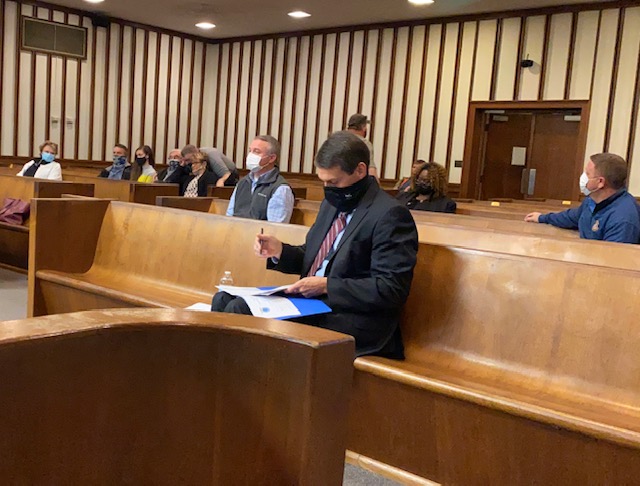 Many testify to Tar Heel Fire Department and other volunteer firefighters suffering so much. White Lake Fire Chief Dale Brennan stood and addressed the matter with the commissioners the night of the meeting. He explained what Lt. Allen was doing, stating, “What he was doing is something the county employees should have been doing, and he got killed.”

Chief Brennan added, “It’s a disgrace that the county commissioners won’t thank our volunteers for what they are doing.”

Since the meeting, Moorehead Fire and EMS Chief Jamie Fulk took time with BladenOnline to explain a first responder’s perspective on the scene during that tragic day in 2006. Chief Fulk is a former Elizabethtown Fire Chief and was one of the first to respond to Lt. Allen’s fatal scene.

(Listen to Chief Fulk’s interview on our YouTube Channel.) After explaining the call that day and the experience of responding to the wreck, Chief Fulk is stunned at the commissioners’ lack of support.

He said, “First of all, you have to understand, this individual, who was one hundred percent volunteering their time for their community, was killed in the line of duty.”

He continued, “They were killed trying to do something good, to lower the fire insurance rating. They were giving their time, and they ended up giving their life. I don’t understand how this is not a simple vote to do the right thing.”

Chief Fulk continued, “I don’t want years from now when his daughter, mom, and dad are riding down the road, and they come across this bridge, and it’s not good memories of Ron, but memories of the fight. That should not be the case. It’s just unbelievable to me.”

To the commissioners, Fulk directed a statement, “Please put the politics aside and treat this person as if it is your own son or your own daughter.”

He added, “I ask any of these commissioners who are holding up the vote, if this person died under your command, would you want them to be treated this way?”

Mr. Bullock responded to the media with a written essay. In an email, Mr. Bullock stated the essay is submitted by Mr. Cogdell, Dr. Munn-Goins, and himself. He requested the media publish the “essay” in whole. View the essay by clicking here.

In the essay, the commissioners mentioned the board unanimously supporting a bridge naming on Martin Luther King Drive in Elizabethtown in “honor of the late J.C. Bachelor, a civic leader and beloved member of the community” in 2020. The essay states, “The NCDOT refused to act on the request, and the entire situation resulted in needless anger and hurt feelings that are still not fully healed.”

However, the North Carolina Department of Transportation confirmed today there was no application or fee for the honor submitted to NCDOT. The reason for the hold on naming the bridge on Martin Luther King Drive in Elizabethtown is because of the application and investment due were not submitted for the process and not because of a refusal from NCDOT.

Also, in the essay submitted, it states, “…the support of the citizens of the county is a deciding factor in the approval of the action by the NCDOT State Board. Simply put, if the request does not have the unanimous support of the community, it will not receive approval from the NCDOT.”

Other local citizens contacted BladenOnline and wanted it on record, stating, “The concerned black citizens support the Lt. Allen family and honoring him by naming the bridge the Lt. Ronald “Ron” Allen Jr. bridge. We do not support the idiocracies of these three people. We are tired of it, and we are speaking up.”

Update: Commissioner Mr. Cogdell contacted BladenOnline and stated the accounts are not accurate. According to Mr. Cogdell, the proclamation on racism has nothing to do with the feelings regarding the bridge’s naming. He explained the commissioners’ unanimously approved the road in Lt. Allen’s honor, but some of his constituents did not want the bridge named because it was in a different district.

He said, “Every jurisdiction has their own guidelines. I know what the statute says, and I will live by the statute.”

View the full “essay” below as submitted by Commissioner Mr. Arthur Bullock.

Over the past several days there has been much discussion over the issue of naming a bridge in Bladen County to honor fallen firefighter Ron Allen of Tar Heel. There are many aspects of this subject that need to be explained and clarified, and that is the reason for this essay.

First of all, there are many state laws, rules, and guidelines that govern this decision in accordance with North Carolina General Statue 136-18. County commissioners do not have the authority to endow this honor, but a unanimous resolution by the full board can be considered by the North Carolina Department of Transportation (NCDOT) Board when a request such as this is made. In addition, the support of the citizens of the county is a deciding factor in the approval of the action by the NCDOT State Board. Simply put, if the request does not have the unanimous support of the community it will not receive approval from the NCDOT.

Bladen County has recently seen the results of an effort to name a bridge in honor of one resident fail. In 2020 a small group of Bladen County residents asked the Bladen County Board of Commissioners to support naming a bridge in Elizabethtown in honor of the late J.C. Bachelor, a civic leader and beloved member of the community. The board of commissioners unanimously approved a resolution in support of the naming, although there had been no public discussions about the consideration of the resolution and naming.

Once the resolution had been passed by the commissioners and publicized in local media outlets, resistance to the naming of the bridge arose, with several county residents contacting the NCDOT to express their opposition. The NCDOT refused to act on the request, and the entire situation resulted in needless anger and hurt feelings that are still not fully healed.

Since the subject of naming the bridge to honor Mr. Allen has become more widely known throughout the county, members of the board of commissioners have been contacted by citizens who support the honor as well as some who oppose it in its current form. Many residents have asked questions that need to be answered and submitted information that needs to be verified and considered before making a decision.

The most common of the questions and comments refer to other public servants who have lost their lives while in service to Bladen County, yet have received no similar honor. Several citizens commented that they would like to see other local heroes honored in the same way. Local residents have mentioned three particular examples of first responders as deserving to be honored as well, and there are possibly others who deserve the same recognition.

Those cited by callers include David Hunsinger Jr., who died in 2011 in a motor vehicle accident while responding to a call. He was 23 years old and had served in the Tar Heel Volunteer Fire Department for six years when he died, leaving behind a wife and two young children. His father is Chief of the fire department.

John M. Hall was Deputy Chief of the Clarkton Fire Department when he died in 2012. He was 48 years old and had served as a volunteer in three different Bladen County fire departments for 21 years. Deputy Chief Hall died after suffering a heart attack while answering a call for help.

In January of 2019, James Smith was serving with the Bladen County Sheriff’s Department on active duty supervising inmates when he suffered a stroke and lost consciousness. Inmates called for help and tried to save him, but he died in the hospital.

The small community of Tar Heel has sadly lost two young men who gave their lives in service to their communities, leaving behind wives and children. It is difficult to explain a decision to honor one but not the other.

Some residents have questioned the location of the proposed honor, suggesting that it should be located in the fire district where the fallen hero served, and asking what if a tragedy happens to another firefighter who lives in the district where the bridge is located. Others have asked if the fire department members where the bridge is located support the naming, and if other fire departments in the county have been consulted about the decision.

All of these surrounding questions and issues need to be investigated, answered, and resolved to insure that the entire county is unified in support of the naming of this bridge, because if they are not the effort to bestow this honor will not only fail, it will result in even more strife and division among county residents than that which this issue has already generated.

As members of the Bladen County Board of Commissioners, it is our duty to look at all sides of an issue and listen to the concerns of all residents of our county. This is a responsibility we take seriously, and to do anything less would be both a disservice to the people we were elected to represent and a violation of the oath of office we took when sworn into office.

Allen Family Feels Punished Due to Politics in Bladen County