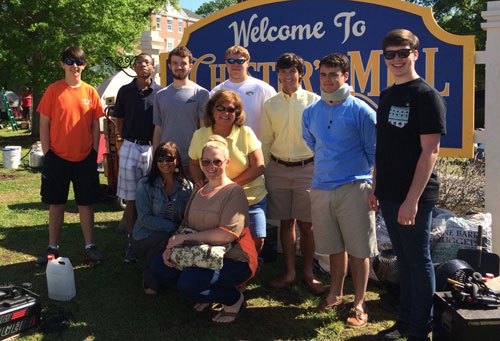 Harrells Christian Academy’s Video Arts class experienced the field trip of lifetime recently when they visited the set location of CBS’s TV Show “Under the Dome” in Burgaw, NC.

The field trip, arranged by HCA’s Karen Burton, gave students a full look inside the workings of a popular TV show, filmed right here in North Carolina.  Students were given an extensive tour of the set as well as allowed to meet several members of the crew and discuss their job titles, responsibilities, and history in the business.

“As an educator, I can’t think of a better experience for our students,” said Meredith Horne, Video Arts teacher at HCA.  “The knowledge they were able to gain on that set is invaluable.  It’s one thing to tell them about it in a classroom, it’s a completely different ballgame when they are able to see it in action, in such a professional manner.”

On April 21, 2015, the group traveled down to Pender County with great weather at their backs and even better opportunities in front of them.  While on the set for the tour, students were able to explore the various trailers, including the lighting, props, wardrobe, hair and makeup, and food services.  At each location, the group was introduced to those in charge as they listened to that person describe what they do in their position.

Students and adults in the group were allowed to ask questions freely, both about the show and about the vocations being discussed.  The group were even able to meet directors and assistant directors for the show, all who were extremely hospitable, knowledgeable, and welcoming.

The group also learned about the effect of recent tax credit changes on the industry.  Failure to renew film tax incentives in the state’s legislature have severely affected NC’s 30-year film history, one that began with films such as “Dirty Dancing” and “Firestarter”.  This inaction and resulting increased costs have forced many of the over 4,000 strong workforce to move away from NC.  The projects have seen an even larger evacuation from NC’s borders. An industry, which just last year, hosted over 60 projects, is now down to only 3.

Students were able to discuss these numbers and their effects on the film crew, actors, and directors, as well as the local economies.

“This is more than just about hotels and restaurants, but also for things I would have never thought of, like local hardware stores that provide the raw materials for the set.  They will suffer too,” said Brayden Sutton, HCA freshman from Clinton.

Students and staff alike continued discussions following their visit to the “Under the Dome” set.  HCA Senior Brenden Giles, a Burgaw native, was especially moved by the trip and has began actions to see if the film industry is an avenue he would like to pursue in the future.

“I think after visiting the set, I am more interested in the back end side of things, editing, post-production stuff.  It was fun to visit the set, but I noticed a bunch of down-time for different positions.  I think I would rather have a much more hands-on approach to things,” concluded Giles.

The field trip was truly one-of-a-kind and HCA, the students, and the staff are all very appreciative of the opportunity afforded to them by members of the cast and crew, the town of Burgaw, and CBS studios.  The trip was enjoyed by all of the attendees, many of whom hope to be able to return to the film set in the future.