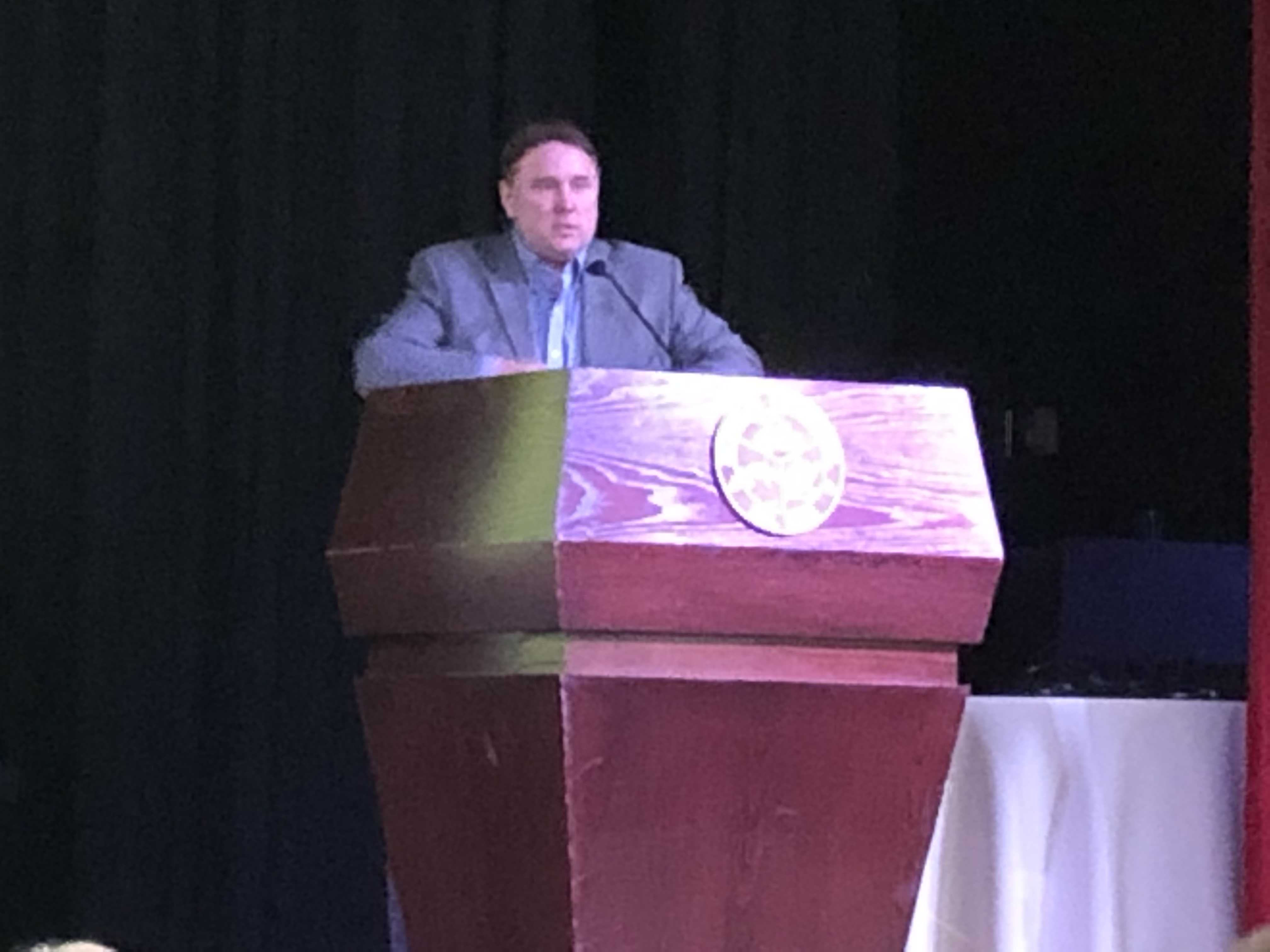 Curliss announced to the large crowd in attendance that Joey Carter, a Duplin County farmer, has been selected as the NC Pork Council’s Outstanding Producer of the Year. Carter was one of the defendants in the hog trials and lost both his cases. Carter’s cases along with the others are on appeal at the Fourth Circuit Court of Appeals, according to Curliss.

In the meantime, Carter has watched the hogs being removed from his farm and the buildings that once held the hogs are now empty. Carter has been operating his hog farm since 1984 without complaints, said Curliss.

Curliss gave the large crowd in attendance an overview of the history of hog farming in North Carolina and how the industry has grown and changed. He spoke about how sanitation and waste disposal methods have improved through the years through research and modernization. 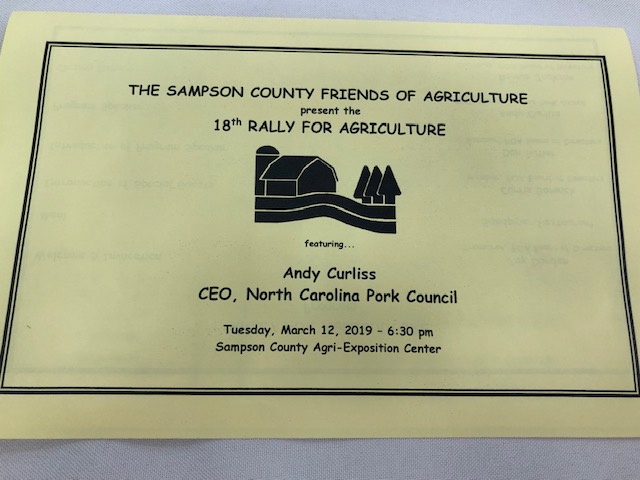 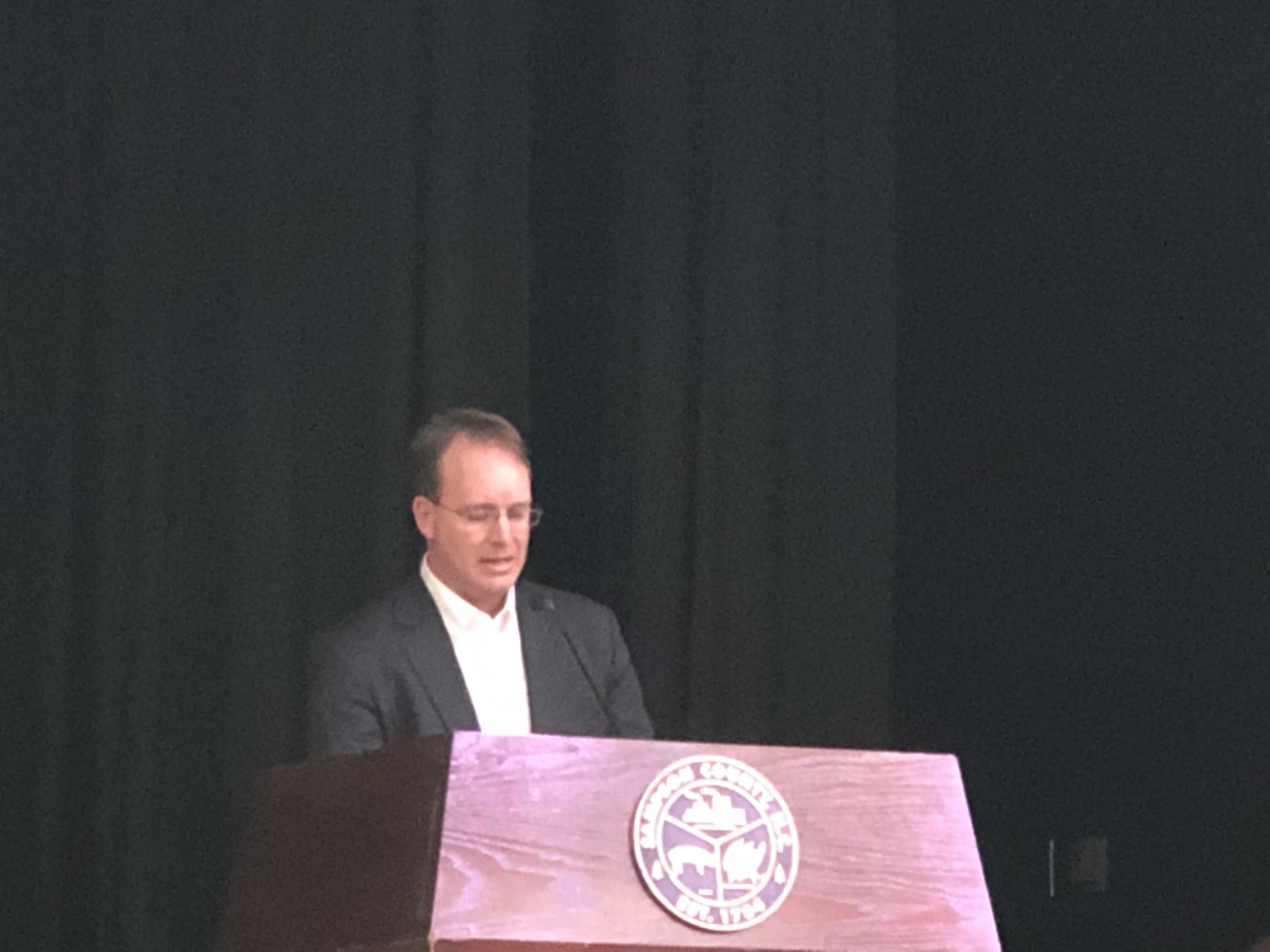 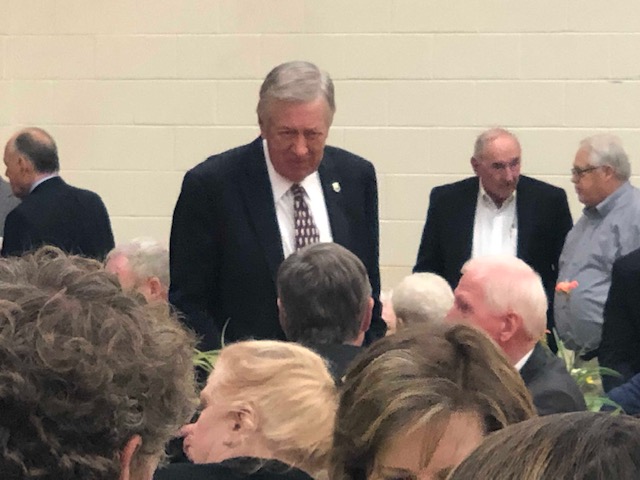 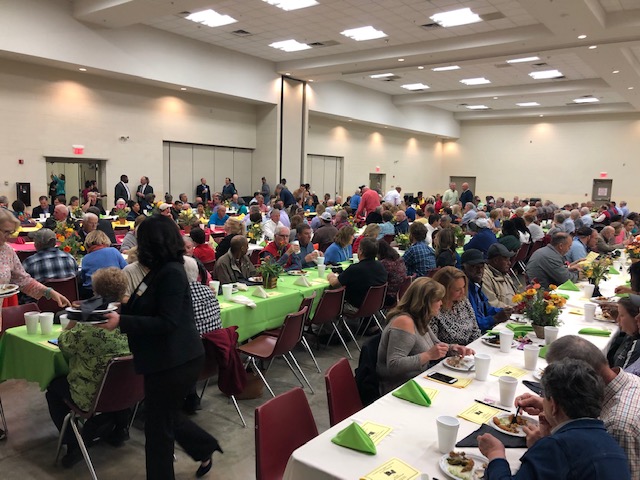 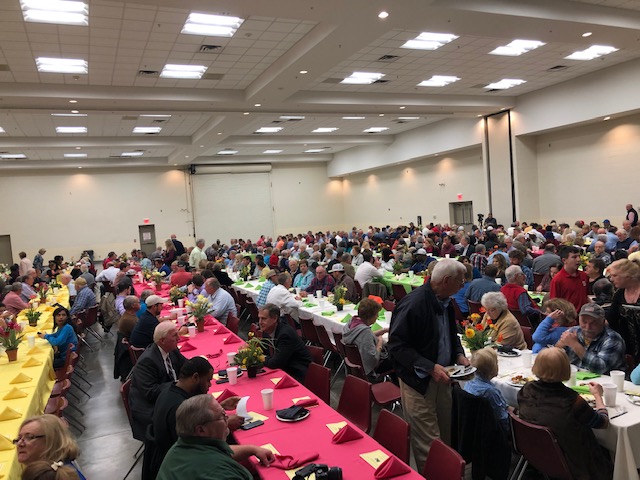 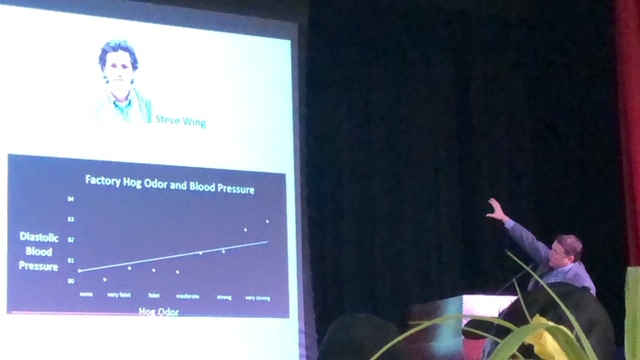 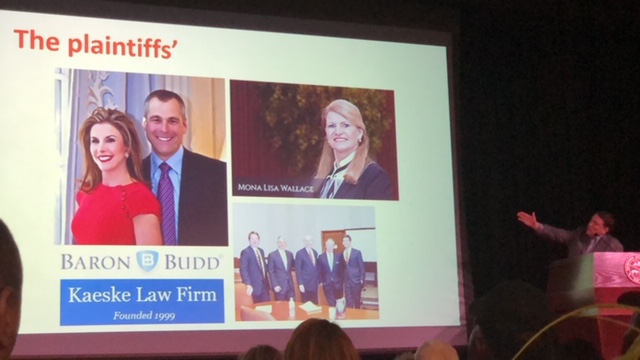 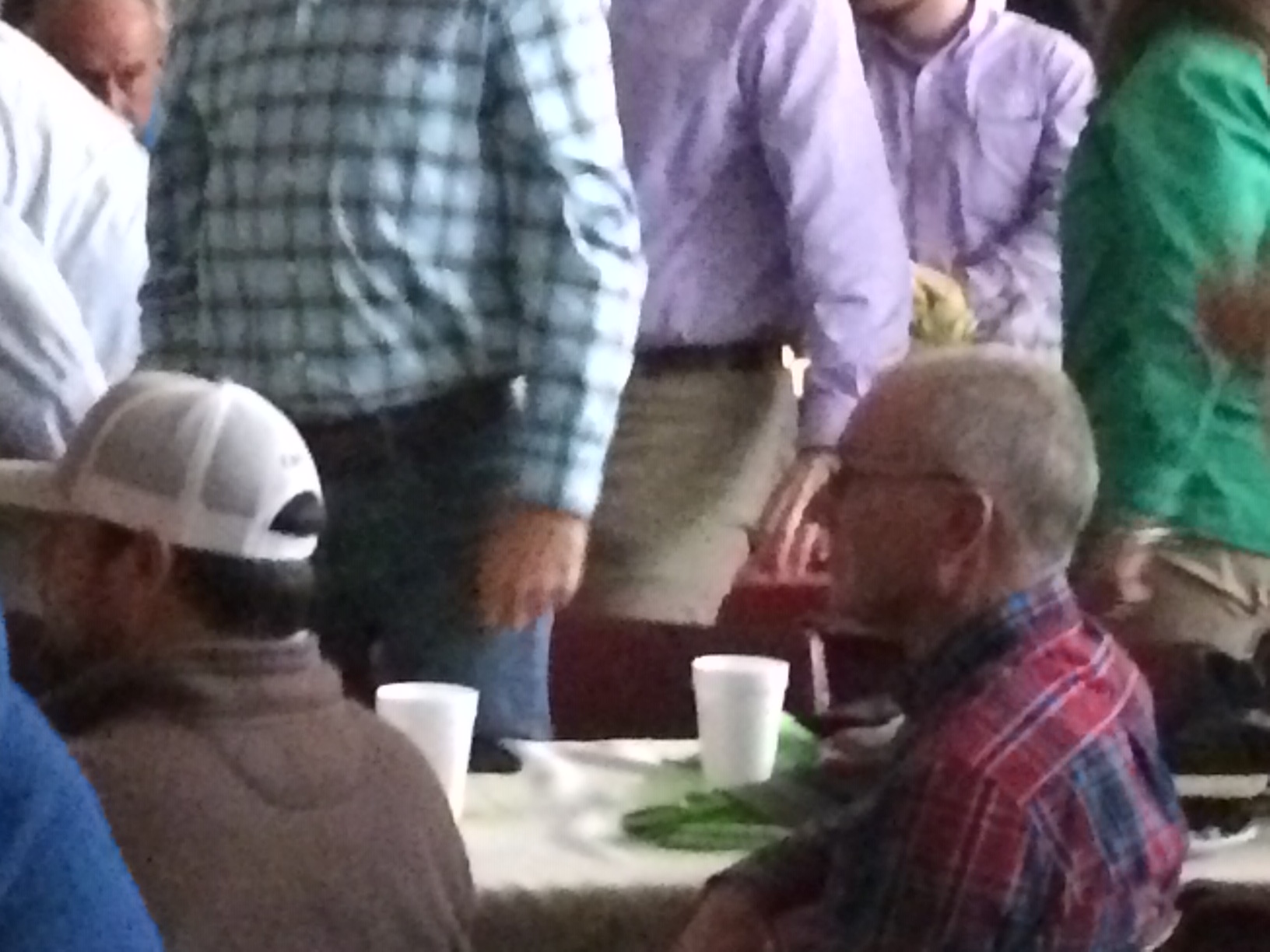 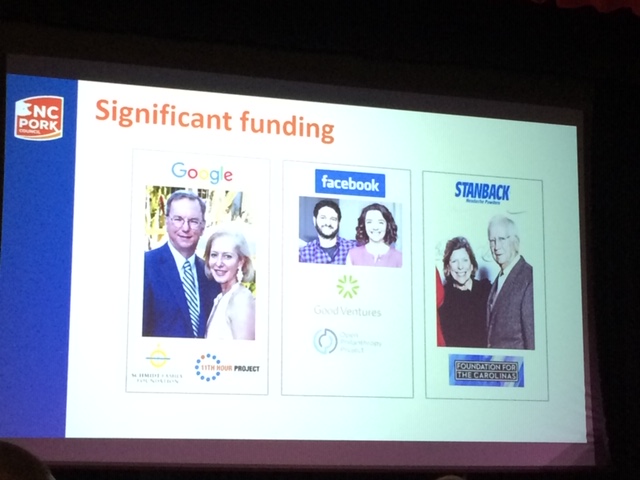 Curliss also spoke about the attorneys who are filing the nuisance lawsuits against North Carolina’s farmers. There are currently 26 nuisance lawsuits that have been filed in federal court against Murphy-Brown, LLC. The attorneys for the plaintiffs have said the lawsuits are filed against the company and not the farmers, but in each case contract growers have been included in the lawsuits. Contract growers that have been named so far include Joey Carter, William Kinlaw, Greenwood 1 and 2, and the Sholar Farm.

Curliss explained that Texas Attorney Michael Kaeske has teamed up with a Salisbury, North Carolina Attorney named Mona Lisa Wallace to bring these lawsuits. They have also been joined by Attorney Lisa Blue Baron who is a part of a class action law firm called Baron and Budd.  Curliss said both Wallace and the Baron and Budd law firm are members of a group called Public Justice, formerly known as the Trial Lawyers for Public Justice. 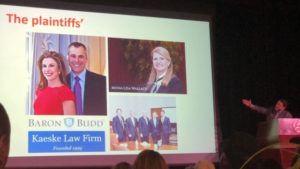 “The plaintiff has a food project of their own and is looking for ways to attack farms,” said Curliss.

Curliss explained that Public Justice has its own “food project.” He stated that Public Justice claims on their website to be holding factory farms “accountable” for their operations. Curliss stated the food project is misleading and makes claims that factory farms abuse their animals, dump waste on open fields allow it to enter groundwater and more. Curliss stated this information is false.

Curliss said thanks to modern technology and research many of today’s farms use less water, they collect store and treat manure to be used as fertilizer, they practice animal safety and food safety. He said the false statements above are being told to jurors in the nuisance lawsuits. Curliss also pointed out the jurors in the nuisance lawsuits have little or no knowledge about agriculture.

Curliss also pointed out Judge Earl Britt, who has presided over four of the five nuisance trials, so far, ruled against allowing the defendants to use an expert witness, Dr. Pamela Dalton who has worked for NSAS and is a renowned expert on odors, as a rebuttal witness to the plaintiff’s own experts. Curliss stated Dalton had visited Joey Carter’s hog farm and conducted studies of odors around the farm and determined the farm did not produce odors that rise to the level of nuisances.

He also discussed how Kaeske has used a tactic called the “Reptile Theory” which is a tactic that allows attorneys to tap into the “reptile” part of jurors’ brains. Curliss explained that is the oldest part of the human brain that triggers our most basic responses of safety and self-preservation. Playing on this, Kaeske uses reptile theory methods to instill the jurors with the idea that these farms are endangering our health and well-being. Curliss said Kaeske convinces the jury they have the power to stop it by ruling the farms are a nuisance.

Curliss also said the nuisance lawsuits are well financed by groups such as the NC Environmental Justice Network, the Foundation for the Carolinas, Good Ventures, the 11th Hour Project and many others. He said they along with Attorneys Kaeske, Wallace and Budd, are all attempting to create a “movement” in support of their own food project. Curliss stated the way to combat the movement is through education about the movement and their tactics.