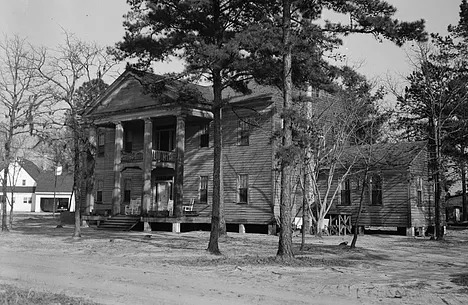 Legends and Lore of the McDowell House

It’s that time of year again when things go bump in the night and people experience the unexplainable. There are legends, ghost stories and more that make the rounds.

With all its southern small town charm, Elizabethtown is not lacking in legends of her own.

One of Elizabethtown’s older homes is the stately Georgian revival that stands near Cromartie Road just off of Broad Street. This home, built before the civil war, was the home of confederate soldier, Colonel John McDowell. I got a chance to sit down with current owner, Chris Adams, to talk about the legends he has collected. He said that many stories have come down through the generations, such as the house serving as a hospital during the civil. Adams believes that this story may be a stretch because no civil war battles were fought near Elizabethtown. Col. McDowell was injured during the war and was mustered out to return to his home to convalesce. Adams thinks that more than likely, the Colonel may have hosted other convalescing officers in the home near the end of the war. In fact, Adams said he has heard that because of the shortages near the end of the war, the visiting officers stabled their horses in the dining room so the horses would not be stolen.

The McDowell house has been home to about a half a dozen families throughout the years.

As of late, the house had served as an Inn, run by Adams.

Adams said, “Last summer, I issued an invitation to anyone who ever lived at the house, a complementary stay at the Inn. The Thorton sisters, who grew up in the house took me up on the offer.”

Adams went on to say that the sisters, now in their 70’s, shared many stories about what they felt was the spirit of Col. McDowell. The Thorton family occupied the house for 40 years. The sisters told Adams that they ate all of their meals in the formal dining room and that on many occasions they would hear footsteps coming from the room above, which had been the bedroom of the Col. One of the sisters told of a ghostly figure that she woke to, standing at the foot of her bed. She told Adams that she believed the figure to be Col. McDowell. The sisters also told of a time that their mother walked into the back of the house to see the spirit of the Col. standing in the sunroom. The sisters went on to say that no one was ever frightened by the Colonel.

In more recent times, the Cole family took up residence at the house for about 30 years. According to a granddaughter of Hunter Cole, Kathryn Cole, the ghost of the Colonel is still in the house. She recalls a time she had a run in with a ghostly figure as the spirit was ascending the stairs. Kathryn also told me about family stories she had heard from her Uncle Lee and Aunt Kitty, who grew up in the house. Kathryn says the ghost used to wreak havoc for the Cole family. Dresses that were hung in closets at night were found strewn across the floors in the morning. According to Chris Adams, he was told the Cole family put a glass of wine out each Christmas Eve as an offering to the Colonel.

Adams said that he has experienced little paranormal activity in the home while he has lived there. Although he did recount a few strange happenings. Adams says he has a clock on the mantel in the front parlor and one evening it struck thirteen times, he said it was very odd because it had never struck thirteen before nor has it struck thirteen again. He also said that when he has done renovations or moved furniture around, he hears unusual noises at night. He says it is like he has disturbed an energy that lives within. Adams says he has always felt comfortable in the house. “Perhaps the energy or spirit likes me,” said Adams.

Whether you call them ghosts or spirits or something else, those who have had encounters believe the Colonel is still there, bumping around his old house.