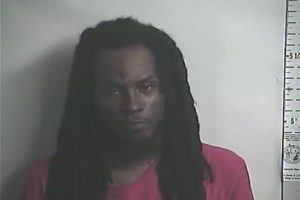 Haywood Lee Lewis, who is one of two men charged in the shooting death of Bryan Barnette Bellamy Jr., will not face the death penalty, the state announced. He had bond set at $500,000 during a hearing Monday in Bladen County Superior Court.

Lewis, 38, of Elizabethtown, was arrested April 21 and charged with first degree murder as a result of the shooting that took place at 1817 Elkton Road in Clarkton, according to court records.

No decision has been made whether to seek the death penalty against the other defendant, 24-year-old Christopher Jaquan Smith, assistant District Attorney Quintin McGee said.

Lewis was transferred from Bladen County Jail to Central Prison in Raleigh soon after his arrest for medical treatment. He has stage four bone marrow cancer, according to court testimony.

Michael Willis, who is Lewis’ lawyer, requested a $25,000 secured bond. “He doesn’t want to die in jail for something he didn’t do,” Willis told the court during Monday’s hearing. “I believe my client is not receiving the care he needs.”

Lewis’ fiance, Susan Montgomery, testified during the hearing that Lewis was at her house when she left to take her son to school between 8:30 and 9 a.m. on the day of the shooting. “He doesn’t even know the person who was shot.”

A call was placed to the Bladen County 911 center about 9 a.m. in reference to the shooting, according to Bladen County Sheriff James A. McVicker.

Montgomery testified that she had seen Lewis on Sunday, June 12, and that he had recently had two heart attacks. She said that Lewis was getting better treatment for his cancer from his doctors in Wilmington and Chapel Hill than he is in prison.

McGee countered that Bellamy, who was 21, had robbed Lewis and that Lewis hired Smith “to beat up Bellamy.” Smith told investigators that when Bellamy came outside his home that morning that Lewis produced a weapon and fired four shots, McGee said.

McGee requested Lewis continue to be held without bond and that the state is well-equipped to take care of his medical needs. If a bond was set, that it be at least $1 million.

Superior Court Judge W. Douglas Parsons set bond at $500,000 and, if Lewis posts bond, that he be placed under in-home electronic monitoring. Parsons said that Lewis is “a threat to the community,” noting that Lewis has had two prior assault with a deadly weapon convictions in the past 10 years.