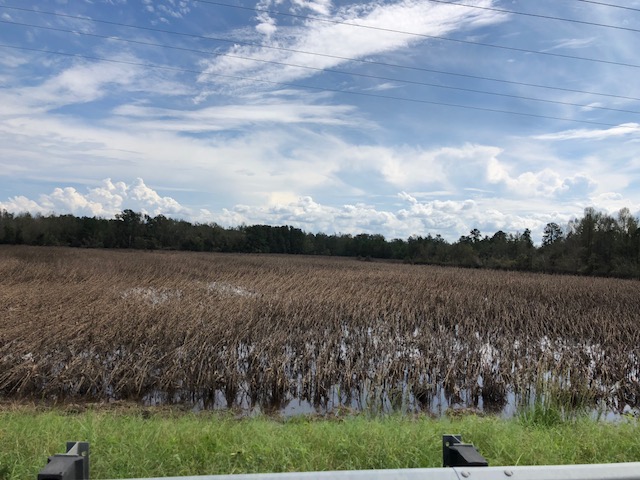 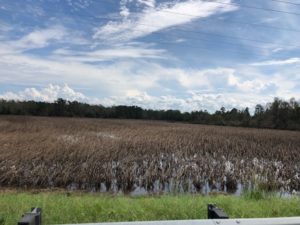 RALEIGH – Hurricane Florence inundated southeastern NC with record rainfall and left many fields saturated and flooded for days, while fields in other areas of the state received only a few inches of rain. Although storms like this have complex effects across the landscape, two general effects are most important to consider: 1) soil disturbance, including erosion loss plus accumulation of soil and debris and 2) soil nutrient losses.

“It is important to factor in soil disturbance and nutrient loss in your soil and crop management plans to lessen the impacts on upcoming growing seasons,” said Agriculture Commissioner Steve Troxler. “Our Agronomic Services Division can help with advice and testing services.”

*Erosion of some fields occurred during the storm, so grading and filling gullies may be needed. Ideally, any soil used for fill needs to be tested prior to use since it may have undesirable soil fertility or significant nematodes.
*In addition to erosion, movement and deposition of various sediments may have occurred in some areas and effects on infiltration and drainage can occur. If the newly deposited soil is very different in sand, silt or clay than the original soil surface, consider tilling and blending so an abrupt boundary does not exist between the two layers.
*Debris, including crop debris and other, may be found in fields. Use caution when entering fields adjacent to woods where fallen trees and limbs may be found. Crop debris found in significant piles or mounds less than one inch should be spread or leveled followed by tillage to avoid planting issues next year. If debris is greater than 4 inches deep, consider burning or removal.
*If the soil surface was compacted from rainfall and appears to be sealed and crusted, light tillage may increase air exchange into the soil. Soil microbe activity may be enhanced.
Wet soils are extremely vulnerable to compaction below the soil surface. If possible, avoid driving on wet soils with heavy equipment. Evaluate the need for deep tillage at planting by assessing soil type and potential crop response.

*Leaching of plant nutrients occurred, especially on sandy-textured coastal plain soils. Nutrients most affected by leaching include nitrogen, sulfur, potassium, magnesium, boron, and to a lesser extent calcium.
*In saturated soils, nitrogen that did not leach was lost to the atmosphere as a gas (denitrification).
*Where significant soil movement occurred, phosphorus and some of the micronutrients, such as manganese, zinc and copper, may have been lost by the erosion of topsoil.
*Some fields in coastal counties may have salt water intrusion or significant salt input from ocean spray. Excessive sodium can influence crop establishment and growth; crops vary in their salt tolerance. Soil testing can help identify these fields.
*Soil testing is extremely valuable to determine soil nutrient status except for nitrogen and boron, which are not included in standard NCDA&CS soil analysis. Nitrogen and boron needs are based on realistic yield potential by soil type and crop-specific response, respectively.
*Soil sampling should be delayed until fields are sufficiently dry to sample. If the field is too wet to till, it is also too wet to sample. Sampling should also be delayed until any leveling or reshaping has occurred. Collecting a representative sample is the first critical step in getting reliable information from soil test labs. Soil cores should be well mixed for accurate testing.
*Soils vary in their nutrient levels and their status is highly dependent on soil type and amounts of lime and fertilizer applied. Some finer textured soils may not need lime this year and may have significant nutrient levels. Pay close attention to sandy-textured soils which have low nutrient holding capacity and are prone to leaching. Soil pH can change quickly in these soils and they may require lime. Dolomitic lime that contains magnesium is often used in these soils since it is the cheapest source of this nutrient.
As you consider soil and crop management for next year, it is important to remember that fields need assessing on a field-by-field basis if possible. Your NCDA&CS regional agronomist and N.C. State Cooperative Extension agent can assist you in making decisions related to the soil and crop management. To find a local agronomist or agent, go to the following links, http://www.ncagr.gov/agronomi/rahome.htm or https://www.ces.ncsu.edu/local-county-center/