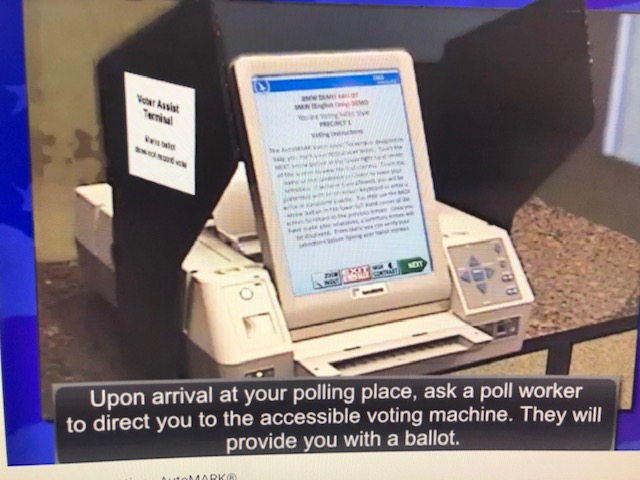 Part 9 Series: Blind or Disabled Voters Have Options To Vote Independently During Elections

Bladen County’s AutoMARK Voting Ballot Marking System provides voters who are blind, visually impaired, or have a disability or condition the ability to vote independently. Two Bladen County voters cast their votes today using the machine, according to Bladen County Board of Elections officials.

The officials explained the machine allows voters to zoom in on a ballot or to hear verbal instructions through headsets. During the election period the machine is located at the Bladen County Board of Elections polling site located at 301 S. Cypress Street in Elizabethtown.

Election officials also said there is curbside voting available as well to assist voters with disabilities.

A video was created by the by the Wisconsin Government Accountability Board’s Access Elections program which demonstrates how to mark a ballot on the AutoMARK® machine. View the video below.

Today, Patrick Gannon with the North Carolina State Board of Elections released the following 10 Tips for Voting on Election Day.

Raleigh, N.C. – In preparation for Tuesday’s primary election, the North Carolina State Board of Elections is providing 10 tips for Election Day voting.

Who can vote? Voters who are registered with one of the five recognized political parties (Constitution, Democratic, Green, Libertarian, or Republican) may only cast a ballot in that party’s primary election. Unaffiliated voters may request a Democratic, Libertarian, or Republican ballot, or nonpartisan ballot, if available. Unaffiliated voters may not vote ballots of the Constitution or Green parties, as those parties conduct closed primaries.

When can I vote? Polls across North Carolina are open from 6:30 a.m. to 7:30 p.m. Tuesday. Voters in line at 7:30 p.m. will be able to cast a ballot. Lines tend to be longer before and after normal business hours.
Where do I vote?: Find your Election Day polling place at the State Board website: https://vt.ncsbe.gov/PPLkup/.

Which contests and candidates are on my ballot? Sample ballots are available through the State Board’s Voter Lookup tool: https://vt.ncsbe.gov/RegLkup/.