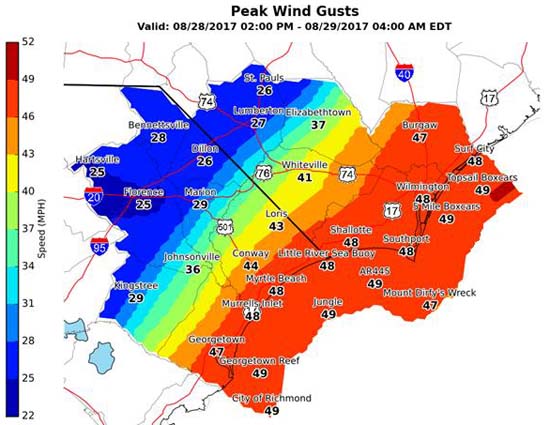 No alerts had been issued by the National Weather Service for Bladen County as of 2 a.m. Monday, but more than an inch of rain and wind gusts of more than 30 mph are possible Monday night and into Tuesday as Tropical Cyclone Number 10 works its way along the North Carolina coast.

A tropical storm watch has been issued by the National Weather Service for Brunswick, New Hanover and Pender counties in North Carolina and Georgetown and Horry counties in South Carolina.

The storm was located about 310 miles southwest of Wilmington at 11:30 p.m. Sunday with winds up to 35 mph. It’s expected to move north Monday, then track along the coastal Carolinas on Monday night through Tuesday morning, while possibly strengthening into a tropical storm, according to the National Weather Service.

Locally heavy rainfall is expected Monday night and early Tuesday, and some spots near the coast could receive rain amounts as high as six inches, according to the alert. Portions of New Hanover County could receive more than three inches of rain during the storm. 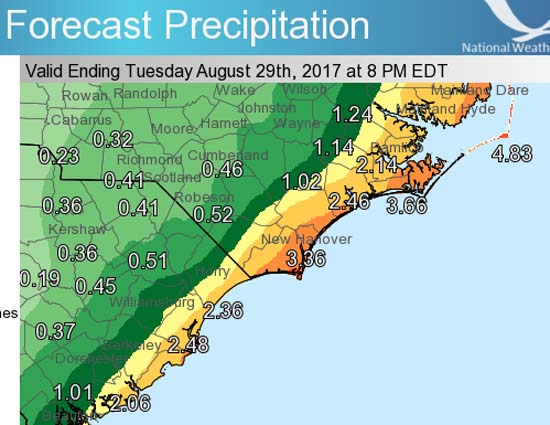 In Bladen County, the National Weather Service forecasts showers to likely begin after 5 p.m. Monday with winds up to 20 mph. There is a 60 percent chance of precipitation with between a tenth and quarter of an inch possible.

Monday night, showers and possibly a thunderstorm may happen in Bladen County with wind gusts as high as 36 mph. There may be between a half-inch and three-quarters-inch of rain possible Monday night.

There’s a 50 percent chance of rain with possible thunderstorms Tuesday as the storm begins to move out of the region.

Skies should be mostly cloudy with a low of around 66 and light winds by Tuesday night, according to the forecast.