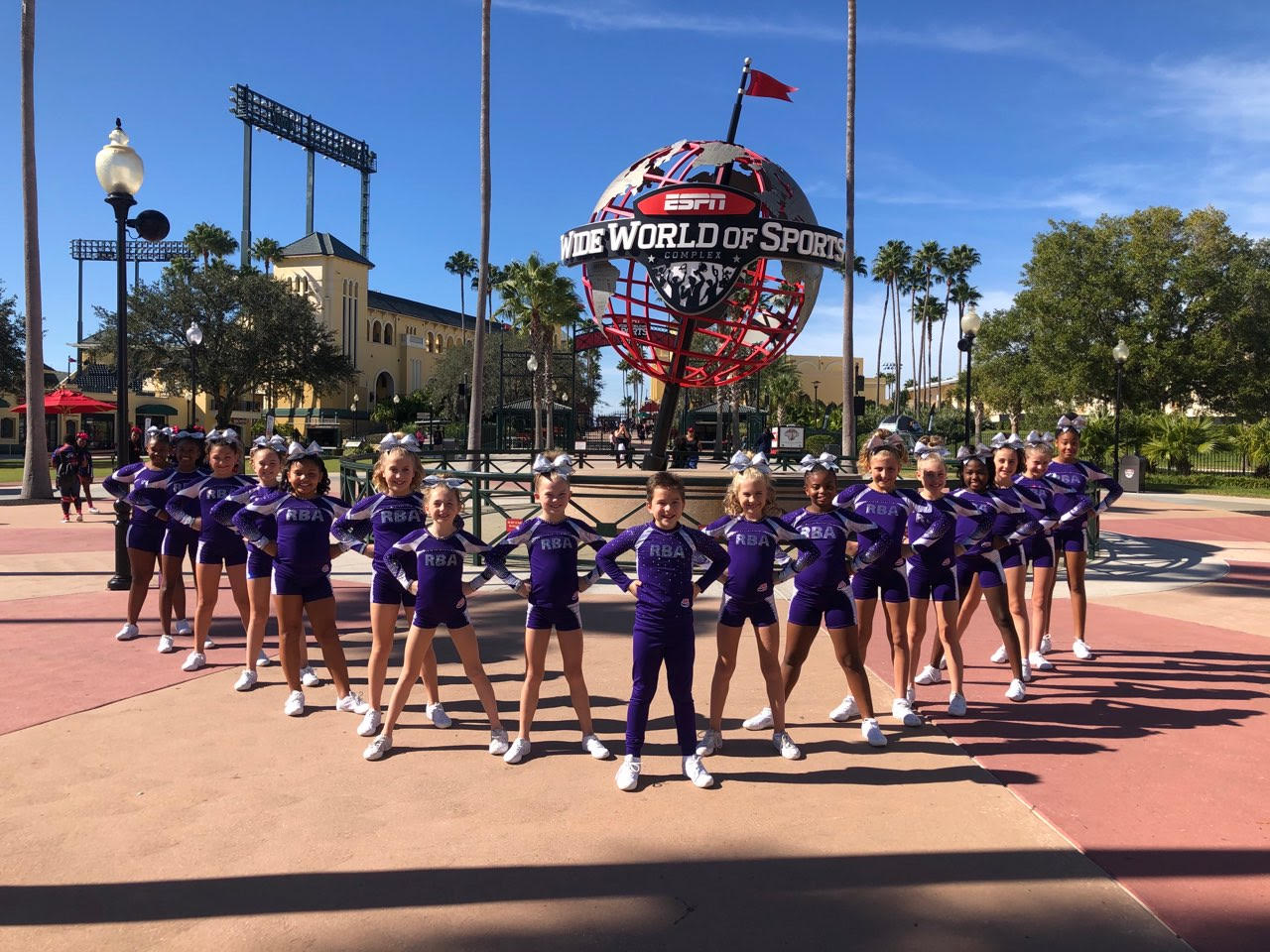 12/20/2019
Spread the love
The Roger Bacon Academy (RBA) Viking Cheerleaders return victorious once again from Walt Disney World in Orlando, Florida after dominating the 2019 Pop Warner National Cheer and Dance Championships! Five teams of students in eight categories ranging in age from 7 to16 spent the week of December 9rd in practice and competition. This culminated on Thursday the 12th in their final competition performances of the season, broadcast live on ESPN3.

“Our senior team, the Purple Reign Varsity team (ages 12-16,) not only won the Varsity Level 4 Large Division National Championship, but also earned the highest score of the overall Varsity 4 division!” said Head Coach, Jean Lafave. This marks the team’s 6th National Champion title in 7 years, and their 4th consecutive win!
The Junior Varsity team, Black Ice, brought home the bronze medal in their division.
Silver Flame, the Junior Pee Wee teams of 8-11 year olds, won National Champion in not only the Level 3 Cheer, but also Level one Sideline Performance Cheer. This is their second year of being duo National Champions.
The Fire and Ice Pee Wee team of 9-12 year olds brought home the National Championship title in Level 1 Sideline Performance, but ALSO are the National Champions in their first year competing in the Coed Cheer Level 1 division.
“Our team had 7 or 8 first-time cheerleaders,” said Brett Tharp, coach of the team and father of a 8th grade team member, “so it was tough to take these kids from zero experience in cheer to a national title. They really rose to that
challenge!”

Also in their first year of competing, the Reign Drops team of 7 to 9 year olds brought home the bronze medal in the Mighty Might Level 1 division, and a National Championship with the highest score of the day in the Mighty Mite Dance Division! This brings the grand total to 21 National Championship trophies since 2011.
The RBA cheer program began in 2005 with only 24 students from RBA’s first campus, Charter Day School, and has grown to 130 boys and girls from across all 4 of the RBA-managed charter schools in coastal North Carolina, including RBA alumni under 16 who are now attending local high schools and early college programs. In order to accommodate team members across schools that are upwards of 50 miles apart, the teams often rotate through different practice locations, often working outdoors, on football fields, or outdoor basketball courts. Their practices often run late into the evenings, rain or shine. Every practice begins with rolling out large, heavy mats for safety wherever they work, and practice ends when they roll them back up and move them to storage or transport them to another location.
“I have six athletes who live in the Southport/Supply area, and one who lives in Whiteville,” said Holly Byrd, the coach of the Black Ice team, and a curriculum author at The Roger Bacon Academy, “Their willingness to drive to Wilmington or Leland for practice several times a week shows their dedication!”
T H E R O G E R B A C O N A C A D E M Y 2
This hard work and dedication has won the teams dozens of trophies thus far, and after earning fantastic scores at recent Pop Warner Coastal Division competitions held in Wilmington and Virginia Beach, they capped of their season by bringing home 6 National Champion titles out of the 8 categories they competed in at this nationally televised competition.
“Cheer and dance is more than trophies, medals, and bragging rights,” Shawn Moore, a parent of two girls in the program said, “it is teaching teamwork, social skills, self-esteem, confidence, and encouragement.”
“It’s an amazing experience to see those kids go out there into that arena at Disney, under those lights, with that big- voiced announcer, live on ESPN,” added Coach Tharp, “watching them walk out with confidence and smiles. I am so proud to be part of this organization!”
The teams are currently enjoying a well-earned break from practice until January, but competition begins again in February with new team members and all new routines to learn.
RBA is a charter school management organization that, since 2000, has provided a signature educational program combining the proven Direct Instruction teaching method with an award-winning signature curated classical curriculum— a combination which consistently produces best-in-county academic performance. RBA’s family of schools includes Charter Day School in Leland, Columbus Charter School in Whiteville, Douglass Academy in Wilmington, and South Brunswick Charter School in Southport. All schools are tuition-free and welcome any student regardless of income, ability, or address. Open Enrollment for the 2020-2021 school year for all four schools is running through January 31, 2020. For more information, please visit www.EnrollRBA.com.