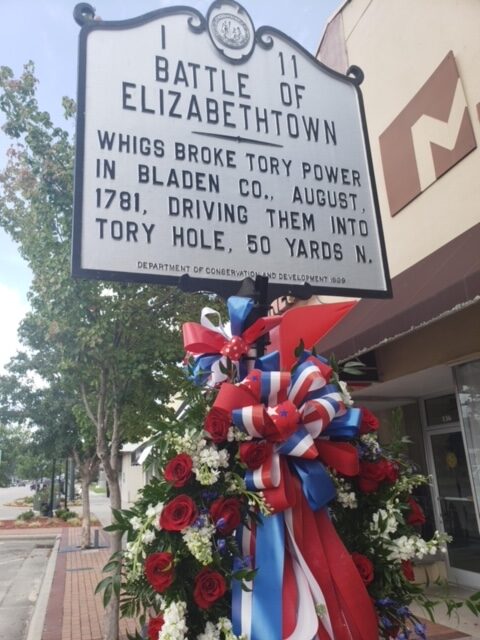 Remembering the 1781 Battle of Elizabethtown

In August 1781, the Loyalists (Tories) raided Patriot (Whig) homes throughout Bladen County, with Col. John Slingsby and Capt. David Godwin in command. While the Tories held Whigs at Slingsby’s base camp in Elizabethtown, another Tory unit, under the command of the infamous Col. David Fanning, returned from Wilmington.

Under the control of Colonels Thomas Robeson Jr. and Thomas Brown, the Whig Militia was very aware of the disadvantage they had with their 60 to 70 men versus the 300 to 400 men in the Loyalist (Tory) Force.

Little did the Tories know, the Whigs had a secret weapon. On August 26, 1781, Patriot Spy Sallie Salter entered the Tory camp. She wandered the camp selling eggs and gathering information for the Whigs.

With the intelligence gathered from Salter, Robeson and Brown devised a strategy to trick the Tories into believing that other Patriot forces had reinforced the Whig Militia.

On August 27, 1781, the Whig Militia, after marching through the night and crossing the Cape Fear River naked, quickly attacked Elizabethtown from multiple angles. By shouting out “Washington!” and ordering their forces to attack from different locations, they successfully convinced the Loyalists that they were being led by either Lt. Col. William Washington or General George Washington, and a militia of 1,000 men was attacking them. This caused chaos within the Tory militia.

After the death of their commanders, the Loyalists were forced to retreat. They sought refuge in a deep ravine near the Cape Fear River, but after continuous attacks from the Whigs, they were forced to surrender. That ravine became known as Tory Hole. 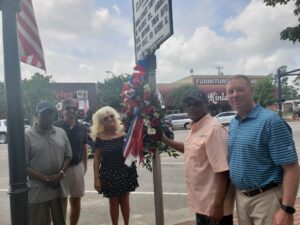 Being considered one of the Cape Fear Region’s most important Revolutionary War Battles (second only to the Battle of Moores Creek Bridge in Pender County), the victory at the Battle of Elizabethtown ended Tory control in the area. The local Loyalists could never regain strength after their defeat in Elizabethtown, having been damaged by the loss of strong commanders and their weapons supplies. 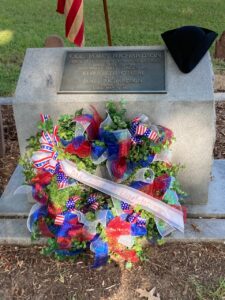 On Sunday, August 29, there was a wreath-laying ceremony at the historic gravesite of James Richardson, a significant part of the Bladen Patriot Militia. The gravesite is located at the old Purdie Cemetery in Tar Heel.

According to the Board of Harmony Hall Village, the ceremony paid tribute to the heroes of 1781 whose actions aided American Independence. At the Battle of Elizabethtown, a small, determined number of patriots banded together to permanently drive superior numbers of the Bladen Loyal Militia from the county’s seat of power.

Michael Aycock, a member of SAR, said, “For the first time, we thought it went fairly well, and it will be even better next year.”

In the photo from right to left, standing behind the tombstone of Col. James Richardson are SAR members Carlton Mansfield, Fred Learned, Michael Aycock, and Gary Green. 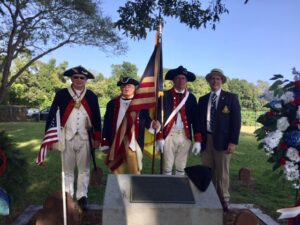