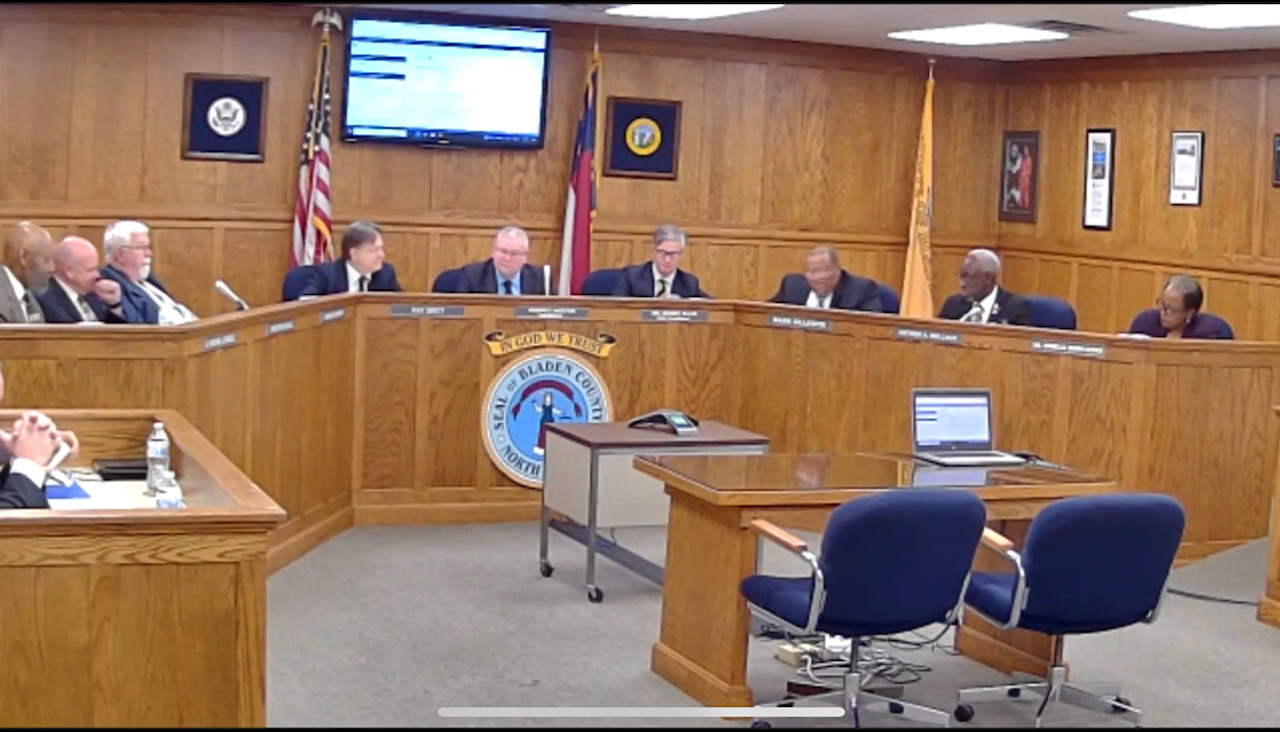 Consent items approved during the meeting:

Commissioner Charles Ray Peterson announced during the matters of interest to commissioners portion of the agenda that the United States Marines would like to meet with the Board of Commissioners on April 12, 2023.

Commissioner Arthur Bullock cited citizens’ concerns about the damaged parking lot at East Bladen High School and the risk of it causing accidents. He recommended Bladen County Schools be encouraged to have the parking lot repaired.

The Board of Commissioners took the time to recognize employees’ years of service.

Eric Graham, a Bladen County Custodian, was recognized for five years of service to the County. Director of Solid Waste, Kip McClary, explained how Graham does a great job for the County. McClary also spoke about Derek Harris, and Bernard Robinson with the County’s Solid Waste division. He commended both men for going above their job duties. Both Harris and Robinson were recognized for their five years of service.

Karen Suggs, Animal Control Manager, was given high remarks from Bladen County Health & Human Services Director Dr. Teresa Duncan. Suggs was recognized for her commitment during her 15 years of working with Bladen County animals. “You’ll never know the measures that she goes to,” Dr. Duncan said about Suggs’ service to the County.

After the recognitions and plaques were presented, a reception was held for the honored County employees.

After the reception, Bryon Scott, CPA, with Thompson, Price, Scott, Adams, and Company, gave a report on the County’s Fiscal Year 2021-2022 Audit.

“We had no difficulties, and we had no disagreements with your manager…” Scott stated during his report. He continued the audit summary by explaining significant deficiencies and internal control non-compliant issues (same as last year), and federal awards have material weaknesses with significant deficiencies in addition to some non-compliance issues (which are the same as last year).

“That’s my concern,” Commissioner Peterson interrupted, “These repeated items… We shouldn’t have repeat items. What are we going to do differently this year?”

Commissioner Bullock concurred with Peterson, “We keep making the same mistake over and over.”

Staff turnovers and the many rules to federal programs are two of the reasons Scott gave for the continued deficiencies.

Dr. Ophelia Munn-Goins recommended looking at the issues every month instead of waiting for an annual report.

Scott gave credit to the County employees who have already constructed action plans to avoid the weaknesses and deficiencies.

Bladen County Manager Greg Martin interjected, “Many of you know DSS has increased their training tremendously and continues to do so.”

Commissioner Peterson responded, “Mr. Martin, evidently, it’s not working, and we have to try something different. I’m not being critical, but the repeat items are what bothers me.”

At the end of the audit report given by Scott, the commissioners approved accepting the audit for the Fiscal Year 2021-2022, with a motion made by Commissioner Cameron McGill.

A Corrective Action Plan Related to accounts receivable was also approved unanimously by the Board.

Mrs. Lisa Coleman, Finance Director of the County, reviewed the Financial Dashboard for the six-month period of time ending December 31, 2022, as well as a Federal Inmate Program summary for the same time period.

McClary appeared before the Board again to provide an overview of the bid process and specifications for the library window replacement project, the Contract with Low Bidder, submitted by Dewey H. Shaw General Contractor, was accepted. The term of the replacement project contract is to begin on February 6, 2023, and is to be completed by June 9, 2023. The absolute charge of the contract is $266,616.00. The commissioners approved the bid unanimously.

Next, the Board reappointed Steve Willis and Tom Martin to the Bladen County Airport Appeals Board for a three-year term of service, with the terms expiring on January 22, 2026.

Commissioner Munn-Goins nominated Dr. Renee Steele to the Bladen Community College Board of Trustees for a term expiring June 30, 2025. The Board approved the nomination unanimously.

Julius Duncan, nominated by Commissioner Munn-Goins, was approved to serve on the Economic Development Commission with a term expiring December 31, 2024.

Commissioner Mark Gillespie nominated Yvette Ross for reappointment to the Elizabethtown Planning & Zoning Commission and Board of Adjustments. The appointment was unanimously approved.

The Board considered approving Various ARPA-Enabled Project Applications. Commissioner Hester told the Board the only application that has everything properly completed is the Elizabethtown-White Lake Area Chamber of Commerce application. The chamber requested $7,000 to promote and host the “Year of the Trail Festival weekend in conjunction with NC DCNR.” The Board approved the chamber’s application unanimously.

At 6:00 pm, the Substance Misuse Task Force will meet at the Bladen Community College Auditorium.

There were no public comments during the meeting.

Listen to the entire meeting published on the County of Bladen’s YouTube Channel linked below.