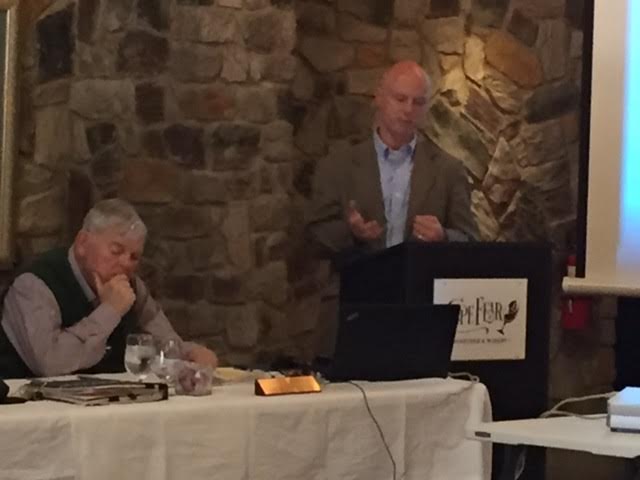 The Elizabethtown Town Council conducted their annual budget retreat on Monday at Cape Fear Vineyard and Winery. Several topics were discussed.
The Elizabethtown Rescue Building located on Mercer Mill-Brown Marsh Road was one of the items being considered. The building was damaged by flooding caused by Hurricane Matthew in October. The rescue squad has been housed temporarily in a building owned Bladen’s Bloomin’.
Town Manager Eddie Madden said that the Elizabethtown Rescue Squad is giving up their technical rescue and returning to strictly medical transport.
According to Madden, the rescue squad’s building was constructed in the 1980s and was built below grade. He said there have been issues with flooding of the building and damage. He said the last few times the building has been flooding, the insurance claims have been denied.
Madden also told the council that the building is not well maintained. There are weeds growing from the gutters and there are cracks in the building. He said the rescue squad has limited recourses and limited personnel.
Madden explained that there is no revenue or funding source for the building as the  rescue squad does not pay rent to the town. He also said the temporary building is being looked at by a company that wants to purchase it.
He told the board that there are four options available to the board in terms of what to do about the building. The first option is to renovate the building to pre-storm condition. The estimated cost to do so is $40,000 and is reimbursable by the Federal Emergency Management Agency but the town must purchase and keep federal flood insurance at a cost of $2,500 per year.
The second option is to demolish the current building and replace it with a new facility. The demolition cost is estimated to be $40,000 and the estimate to construct a new facility is $850,000. There is no revenue source to fund a new facility.
The third option is to demolish the building and not replace it. The demolition cost is estimated to be$40,000 and would be paid for by FEMA. The property could be repurposed as a storm water retention facility undertaken jointly with the North Carolina Department of Revenue.
The fourth option is to demolish the current building and relocate the rescue squad to a different facility. The demolition cost would be $40,000 and paid by FEMA. Currently, Bladen County is providing space. Otherwise, the rescue squad will need to find an alternate location.
The rescue squad currently has two ambulances they operate and they are an “all volunteer” rescue squad running calls at night and on weekends.
Madden said currently, the town is waiting to learn what type of financing FEMA will offer. He estimated that FEMA will most likely offer $40,000.
Madden suggested that the board could invite the members of the rescue squad to come in and meet with the Council.
Councilman Dicky Glenn said of the associated costs with repairing the existing building, “I don’t think we can do it.”
After further discussion, it was the consensus to invite the rescue squad to a joint meeting with the Council.
* There may have been a misunderstanding which lead to a misquote used from Councilman Ricky Leinwand, we have deleted the quote to keep from any further misunderstandings. We apologize for any confusion this may have caused.
Share: