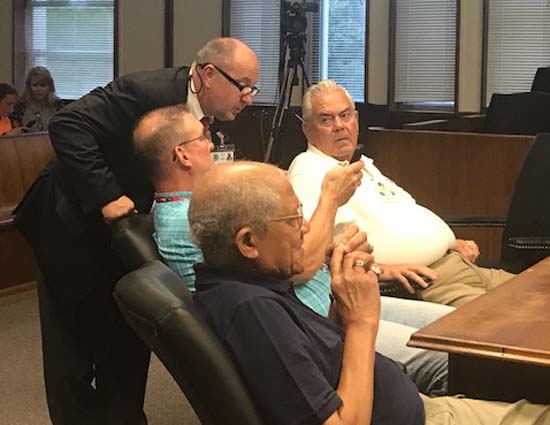 Three members appointed to Bladen County Board of Elections

The newly appointed members are Democrats Deborah Belle and Patricia Sheppard and Republican Emery White. According to the NC State Board of Elections this will constitute a quorum of the five-member board. NC Governor Roy Cooper will appoint the chairman and no announcement has been made regarding the chairman.

Kim Strach, the Executive Director of the NC State Board of Elections, sent letters to the Republican and Democratic party chairmen on March 8, 2019, requesting they provide substitute nominations following the recent evidentiary hearing held in February. Neither party submitted new names, according to Gannon.

“The county boards of elections exercise significant powers with regard to election administration and play an important role in maintaining public trust in our system,” Strach wrote in the letter. “The agency has significant concerns about reappointing board members who presided over operations of the Bladen County Board of Elections when these issues arose.”

“It is particularly concerning that you have suggested we replace our nominees to the County Board of Elections without providing me any reason to do so,” wrote Hayes. “As you are aware, the Director of Elections for Bladen County, prior to her retirement, exercised a month’s worth of leave and vacation time during the midst of this investigation, and the Deputy Director has declined to accept an appointment to that position.”

Chairman Hayes noted this action essentially removes any “memory” of the past occurrences at the Bladen County Board of Elections.

Chairman Hayes continued, “To be clear, if any of my nominees are implicated in any wrongdoing that occurred in Bladen County, we will be the first to call for their resignation and replacement. As you recall, the North Carolina Republican Party recently supported efforts to remove a local GOP BOE member for questionable actions, and we will not hesitate to do so again if warranted.”

You can read Chairman Hayes’ letter in its entirety here.

Following the evidentiary hearing, five individuals were indicted and arrested for their roles regarding the irregularities that occurred with the absentee ballots in the 9th Congressional District race.  McCrae Dowless was indicted along with Caitlyn Croom, Matthew Monroe Mathis, Tonia Marie Gordon, and Rebecca Thompson. The indictments were handed down by a Wake County Grand Jury following an investigation into election fraud in Bladen County that was conducted by the NC State Board of Elections and the North Carolina State Bureau of Investigation (NC SBI).

Dowless was arrested by the NC SBI on Wednesday, February 27, and placed in the Wake County Detention Center under a $30,000 secured bond. He was bonded out on Thursday, February 28, by Bladen County Commissioner Ray Britt who delivered the bond check “on behalf of others.”

Croom is charged with conspiracy to commit felony obstruction of justice and possession of an absentee ballot.

Thompson has been charged with conspiracy to commit felonious obstruction of justice and possession of absentee ballot, according to the NC SBI.

Members of the North Carolina State Board of Elections staff are on-hand in Bladen County to assist local staff with the new election.