A man gained his freedom, the birthday of a slain civil rights leader was celebrated, and an Elizabethtown barber is still cutting hair after 50 years.

In 1978, Joseph Sledge was convicted of murdering Josephine Davis and her daughter, Aileen, near Elizabethtown. The two were killed in 1976. Sledge has maintained his innocence for the past 37 years. On Friday, he was exonerated by a three-judge panel. A DNA expert testified that none of eight hairs found on one of the body’s matched Sledge. Family members said Sledge, who now is 70 years old, would be moving to Georgia. He is entitled to collect $750,000 in compensation from the state for wrongful conviction and imprisonment. 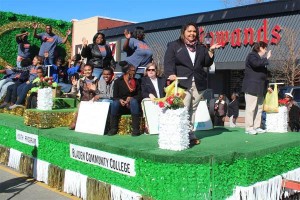 Earlier in the week, Bladen County celebrated the birthday of Dr. Martin Luther King Jr. with a parade through downtown Elizabethtown. On a sunshine-filled Monday and with the temperature in the mid-50s, several hundred people gathered along Broad Street and Poplar Street to watch floats, beauty queens, politicians, baton twirlers, marching units, community groups, churches, businesses and more than 200 motorcycles pass by. 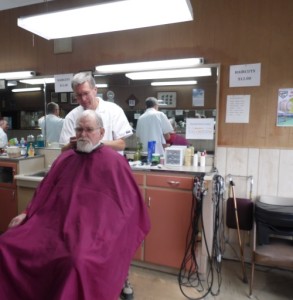 Dennis Hawes has seen a lot of big trucks rumble down Poplar Street from his chair located next to the front window of Bridgers’ Barber Shop in Elizabethtown. He began working at the shop in January 1965, and shows no sign of slowing. “There is always something new,” he says. “You think you’ve seen it all and then you see something new.” The shop invites people to stop by and congratulate Hawes on his 50th anniversary.

In other news last week,

** Report cards for students at East Bladen and West Bladen high schools will be delayed for as long as two weeks while awaiting the N.C. Department of Public Instruction to finalize grades, Bladen County Schools announced Friday. Elementary and middle school students will receive mid-term reports as scheduled, which is Jan. 26.

** Tuesday, Department of Social Services Director Vickie Smith told commissioners that there has been a large increase in the number of children in the foster care program. She said there were 13 childen in foster care in Bladen County in 2013, 44 in December 2014, and 59 in January. Smith also told commissioners that fraud is growing in programs offered by the department.

That’s the week that was in Bladen County.