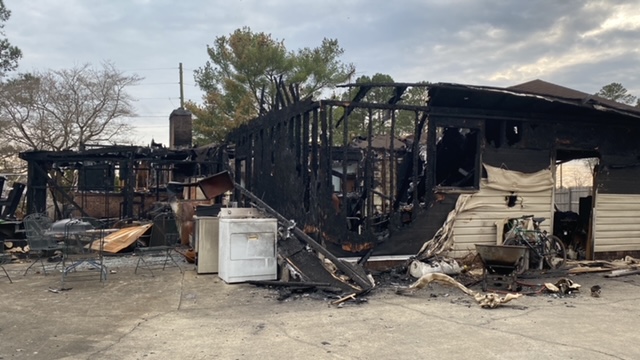 This February is like no other for a local widow. A passerby saw cause for alarm when she passed by Ms. Grace Baldwin’s home at 9381 Center Road in Bladenboro on Thursday, February 10, 2022. A fire had started in the attic area of the residence.

The Bladenboro Fire Department responded before Ms. Baldwin even knew she was in trouble.

Watch the interview with Ms. Baldwin in the YouTube video linked below.

Firefighters were able to get Ms. Baldwin and her dog out of the home safely. There were no injuries due to the fire.

According to Ms. Baldwin, her home burned due to old electrical wiring in the attic. However, the Bladenboro Fire Chief explained the cause of the fire had not been determined due to the extent of the fire damage.

Ms. Baldwin lived in the home for over 45 years. Since her husband passed away, Ms. Bladwin has faced many health issues and now has no home.

Tips from Ms. Baldwin to help prevent a home fire are listed below.

Be careful and look for signs.
Check your electrical system.
If breakers continue to flip, have your breaker box wiring checked by a professional.
Listen for unusual sounds.
Unusual smells may be an indication of fire.

Ms. Baldwin does express her sincere appreciation for those who have helped her during this difficult time. She named her pastor and church, other churches in the area, her neighbors, Tom Lancaster, Patricia Faulk, and her family. She also said the Red Cross has been very helpful with support for her.