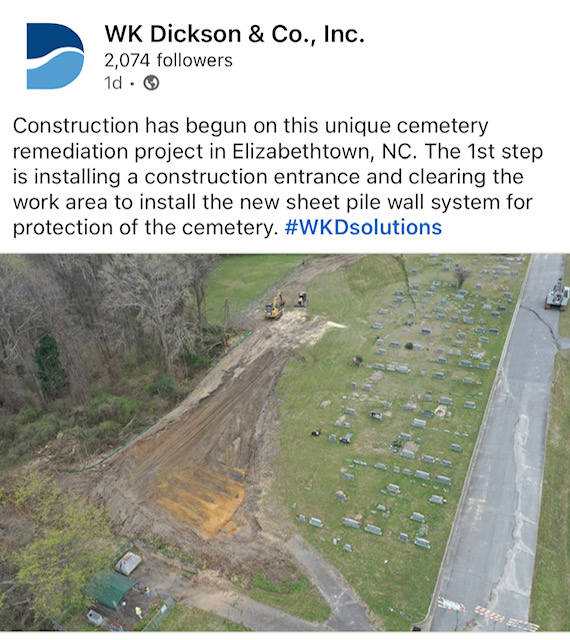 Hurricane Florence hit Bladen County in 2018, causing much destruction. The eroding soil caused by the storm at Elizabethtown City Cemetery has caused many in the area to have a heavy heart and address concerns with the town’s officials.

The storm caused a record rainfall of 35.93 inches to hit Elizabethtown, North Carolina. Due to the historic rain, eroding soil moved grave markers from where they once stood, and the ground shifted, affecting a large perimeter, crossing E. Queen Street behind the Old Trinity Methodist Church.

Engineers with WK Dickson have been working with the Town of Elizabethtown officials to fix the cemetery while applying protective measures to prevent future damage.

In October, WK Dickson representatives stated, “Unfortunately, the Elizabethtown City Cemetery was one of the many casualties of the storm, and it suffered damage when the hurricane’s heavy rainfall saturated the ground, causing it to sink and shift, as much as 2 feet in some areas.”

In a social media post this week, WK Dickson officials stated, “Construction has begun on this unique cemetery remediation project in Elizabethtown, NC. The 1st step is installing a construction entrance and clearing the work area to install the new sheet pile wall system for protection of the cemetery.”

The total estimated cost for the Elizabethtown project was $5,235,649.86, according to officials. FEMA’s share of funding is $3,926,737.40, which totals 75% of the project costs. The project costs will be covered by a combination of State and Federal Funds.

In October, WK Dickson published a video explaining the plan for repairing the area. View the video provided below.