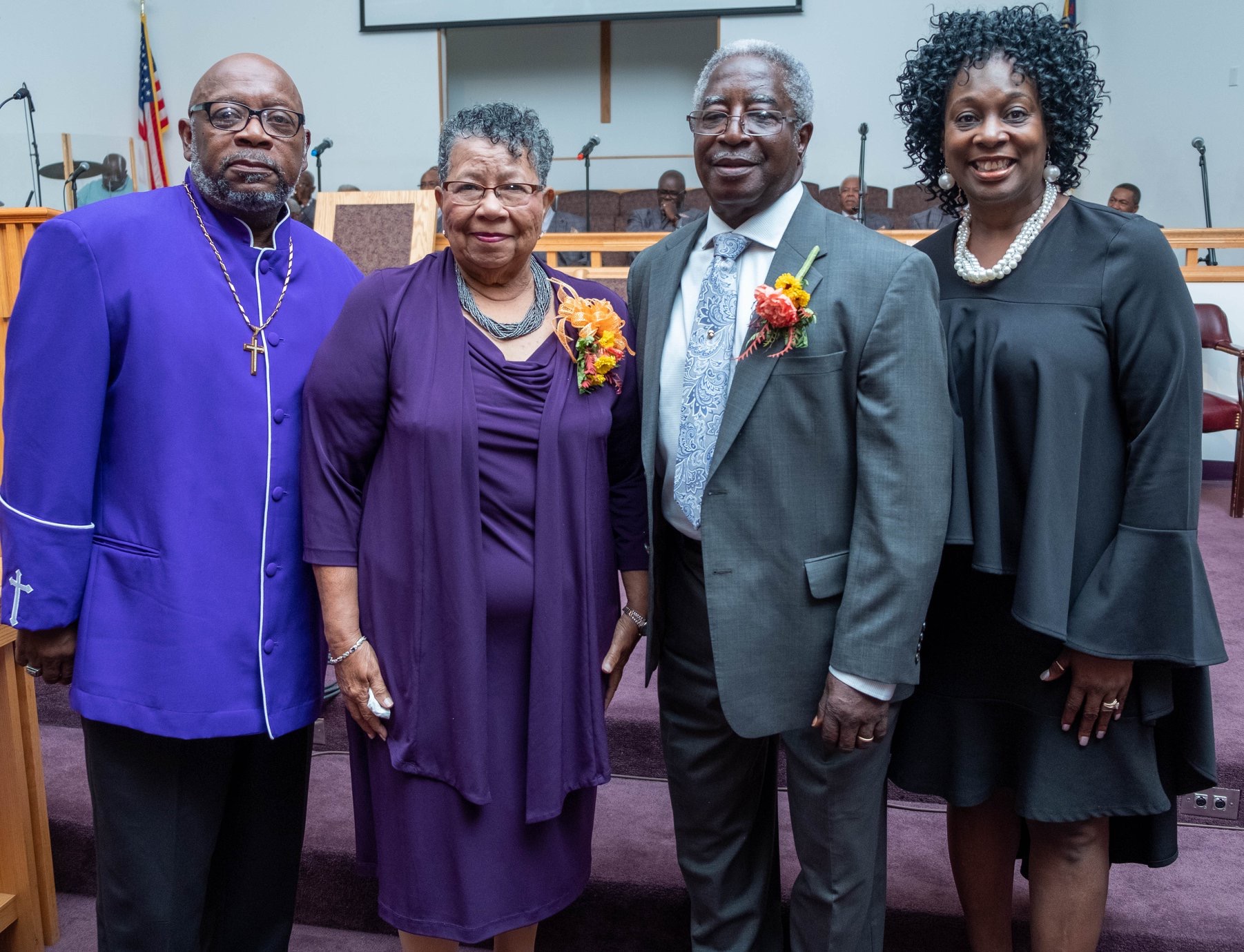 2019 Senior Man and Woman of the Year

Charles Wendell Gillespie
Deacon Gillespie was born in Elizabethtown, NC to the late Ila and Leroy Gillespie Sr., grew up the Mt. Olive Community along with his sister Gladys Gillespie Monroe and brother Leroy Gillespie Jr. Both parents and siblings are deceased. He attended Bladen County Training School, which later became Bladen Central High School. He and siblings were required to walk to school because they were not permitted to ride the bus. Gillespie was a track star and a member of the high school band. Math was one of his favorite subjects.
After high school he attended NC A&amp;T State University, Greensboro NC graduating in 1962. Gillespie was in Greensboro during the historical civil rights protest, the Woolworth’s lunch counter sit-ins. Met the wife Joyce, his boo thang, his honey bun while they were riding on a float as king and queen in high school. They were not an item of love at that time, but he persuaded her by asking her out to movies, family gatherings and rides in his ‘62 Ford. He was romantic because someone said, “when the ‘62 Ford came through town, if you didn’t look directly at the car an individual would believe there was only one person in the car.” Charles and Joyce married in 1962 and they have three beautiful daughters, Gwen, Tiffany and Natalie. They have made him very proud because neither has given him and Joyce any major problems, plus each are employed. Besides, the love for his family he loves basketball and horseshoes. Many have said that he was very mechanically inclined and during that employment was the best auto mechanic in Elizabethtown. With great enthusiasm, he now enjoys being healthy enough to own and operate his hog business. Gillespie was recently selected the North Carolina number one pork producer of the year.
At Baldwin Branch his aspiration is to see the completion of the future building plans and always pray that the church family love one another. His desire is to get his grandchildren together and express to make sure they have a right relationship with the Lord. His advice to anyone. “Be the best that you can be.”

Martha Madelyn McCall
Martha McCall was born to the late Hattie and Talmadge Demery in the Brown Marsh Township of Clarkton, North Carolina. She has fond memories of growing up in a loving family with her two brothers – Albert and Dewey Demery and two sisters – Allie Demery Richardson and Jewell Demery Jefferies.
She attended Booker T. Washington School in Clarkton, NC. Her interest in music led her to sing in the Glee Club; she was also one of the few female students to play the bass drum; she was rather handy with the cymbals as well. Martha loved school subjects in general, she recalls she didn’t appreciate math.
Following graduation, the honoree made a life determination decision that most African-American youth did back in those days. Martha left the rural life in search for better economic opportunities in the northern states. New York was the city of choice. One day while visiting a friend, a tall, handsome Navy man came through the door. His name was Henry Walker, 20-year veteran; now deceased. The two of them hit it off right away and eventually she accepted his proposal of marriage. This union was blessed with
two children, son, David (now deceased). Following the birth of David. The couple moved to California as required by Henry’s Navy obligations. During their stay in California, they were blessed with a daughter – Ann Marie Walker Mallett. Ann Marie and her family continues to reside in California. The honoree enjoys taking advantage of the opportunities to visit her daughter and four grandchildren on the west coast. Returning in to North Carolina to live in 2001. The following year began working with the Bladen County Senior Center and a Day Care Program. The year 2009 Martha applied to volunteer with the Nutrition Program at the Bladen Senior Center; instead of accepting her as a volunteer, Martha was hired as the manager. Her employment continues today. Upon asking the person she mostly admired, her readily reply, “my mother.” She feels that love is the greatest advantage about being in her family and that should be the number one character in anyone’s family. When it comes to identifying the most influential person is her life, Martha did not hesitate to reference Gertrude McKiver her coworker. She is married to Willie McCall whom she met while attending school as a youth in Clarkton. He sings at several engagements in Bladen County, especially senior centers and nursing homes. Her motto is, “Be good to people, treat others the way you want to be treated and love the Lord”. Advice given, “Be true to yourself and be nice to others.”

Published in Church and Lifestyles